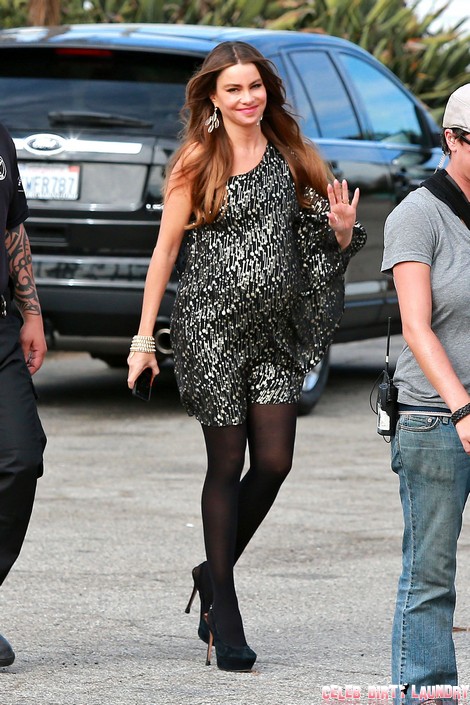 I’m not sure exactly what Sofia Vergara was thinking when she decided to reconcile with boyfriend, Nick Loeb, and get engaged. I’m guessing maybe she’s really not the brightest bulb on the strand and feels she needs a man like Nick to tell her what to do and basically how to run every little aspect of her life. Maybe she just can’t figure it all out on her own and that’s why she ignored the warnings of everyone around her and ran back to Nick.

Anyway, Nick has convinced Sofia (or informed her) that it’s baby time but there’s a catch. He’s not willing to sacrifice her curves or her money to do it, so they are already seeing a specialist about surrogacy options. Both appointments so far have been to gather information about harvesting Sofia’s eggs which is the first step towards Gestational Surrogacy. According to The National Enquirer,

“Nick wants to have a baby with Sofia, but he doesn’t want her to lose her gorgeous shape. He also doesn’t want to sideline her from earning money. Sofia’s red-hot, not just as an actress but as a pitch woman for both the North American and Hispanic markets- she’s got big deals with Diet Pepsi, Kmart and Cover Girl, among others.”

Isn’t it thoughtful of Nick to protect his cash cow from gaining weight and losing money? I mean, why bond with your baby in utero when someone else can instead?  Nick is more interested in Sofia’s money than he is in anything else and a child would keep them connected for life. Everyone close to the actress is said to have warned her that she is nothing more than a walking ATM to this guy, but obviously she still doesn’t get that point at all.

Do you think Sofia is being manipulated by Nick? Is she finding comfort in not having to make her own decisions or is this chick just so blinded by love that she can’t see what is obviously in front of her face? Tell us your thoughts in the comments below!

Editor’s Note – diagnosed with thyroid cancer in 2000, pregnancy would not be a wise idea for Sophia.