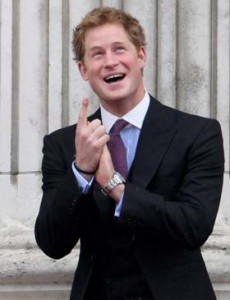 The Royals may be a tad irritated with Prince Harry’s latest antics but now rumor has it that Prince Harry’s Facebook page goes under the pseudonym of Spike Wells and further pictures could be waiting in the wings for exposure. And because of some speculation that the hot Ginger Prince could very well be on the social networking site, the Royal family is furious.

Britain’s Telegraph is reporting that Harry has been posting regularly on the undercover Facebook page and he was forced to close the account because of worries that even more embarrassing shots will go public. My thoughts are, if they are going to go public, they are going to go public. There’s no stopping anybody unless you are ready to throw some big cash in many different directions and after that wild night in Vegas, who knows really how many people saw Prince Harry in all his exposed jewels glory and what kind of wildness the Prince has engaged in prior to the Vegas trip.

And well, according to the site, there have been several pictures from an “even wilder” week on Richard Branson’s private island that have been posted on the Facebook page of one of Harry’s friends. The good news for Harry is that even though he was forced to close down his Facebook two of his best friends also closed their accounts to prevent the pictures from going viral. Still does that mean somebody else wasn’t able to get a hold of those pics? Nope.

Private secretary Jamie Lowther-Pinkerton is said to have been the one to take action on the closure of accounts and is currently on a mission to get more details on the Prince’s wild trip to Vegas.

Rumor has it that the prince is “terrified” that photos from the week long vacation at Branson’s will be released. What could possibly be more embarrassing than Prince Ginge running around butt naked with his hands covering his jewels?

Now that Prince Harry’s Facebook page has been shut down, I can best guarantee it won’t be the end of his days on Facebook. He just won’t be using the name Spike Wells anymore.