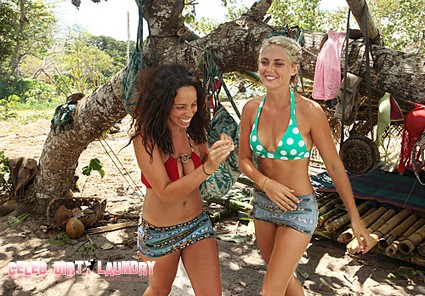 A whole new episode of Survivor: One World airs tonight on CBS and the castaways will continue to try to “outwit, outlast and outplay” each other to become the Ultimate Survivor.  Stay tuned as we live blogging the episode with all the up-to-the-minute details.  The first castaway to exit the game last week was 29-year-old motorcycle mechanic Kourtney Moon.   She shattered her wrist during a physical challenge, and had to be airlifted to medical attention.  If you missed last week’s episode you can read our official recap here!

Survivor: One World continues tonight with episode 2 and called “Total Dysfunction.”  On tonight’s show Castaways jump off the deep end in an Immunity Challenge that requires a delicate balance. Meanwhile, a group of misfits band together, finding an unlikely leader …”  It seems the challenge tonight is on a balance beam for Immunity.  The castaways have to walk across a thin beam, passing their fellow castaways and it looks like it is difficult.

In the promo, host Jeff Probst says the women of Salani  Tean go from bad to worse – so I am guessing they do not do well tonight.

TONIGHT’S RECAP:  When the ladies got back the guys tell the ladies that they had taken care of their fire when they were gone.  The men asks the women if someone got voted off.  Michael is annoyed that Courtney went home because of her broken risk.  Michael would have been happy if they sent 2 people home.

Alicia is happy because she thinks tribal council went just how she wanted and she is happy how Kristina spoke to her.  Alicia is not nice Kristina is trying to be nice to her and Alicia is pretending she is buying it but at the same time she say if she was drowning she would let her die.   Drop a house on Alicia Please……

Over at Salani with the ladies – they are setting ground rules.  The ladies decided to choose Sabrina as a leader and she agrees to take the responsibility.  The first thing Sabrina does is assign people different jobs.

The young girls are driving some of the older ladies nuts.

The teams get tree mail – each team has a big box and they cannot open it until they take it to a clearing in a neutral location.   Each team has to open the box that is filled with ropes with knots.  The first team that opens the box all the knots wins a tarp.   At the end of the challenge the survivors get to keep the box and the ropes.  The men win the challenge and the tarp.

Sabrina is really upset they lost – they were within seconds of winning.

Over at the Manono camp the men are happy they won the tarp – it is huge.  The team is pissed Colton is doing absolutely nothing.  They feel Colton is on vacation and the men are upset because he has all the women on his side.

Colton is upset because he feel like he relates more to the girls and he is upset that the girls threw him out.  Colton feels like he needs to have a camp of his own.

Colton comes to the girls camp and he wants to talk to them all.  Sabrina is pissed because he has snaked his way back to the girls team.  Colton tells the girls he does not care about game or strategy he feels like he has no one on the island.  He starts crying he wants to be with the girls.  The girls tell him he cannot be with them because he is on the men’s team – they tell him it is not an option to have him at their camp all the time.

On the men’s team the men are chanting Tarzan and he is dancing around in his underwear.  Colton tries to get in with the men by showing him he has an idol which he says he is playing next tribal council.   Colton is a little crazy.

Immunity Challenge – Immunity is back up for grabs – both teams will line up side by side on a balance beam over water.  The men decide to site Tarzan out because they have on extra member.   How it works is the first person at the end of the beam has to get by the other people and get back to the beginning of the balance beam.  They can only touch one person as they go by.  If they touch 2 people they must jump in the water and restart.

At Salani Kat tells the other ladies she found the challenge really hard.  Sabrina tells her she is a great rah-rah girl but she needs to use strategy and logic.  Sabrina thinks Nina walks around like the walking dead.  Nina on the other hand is upset because Kat jumped in the water twice for no reason.

Nina tells Monica that she is going to vote Kat out because she is a dumb blond.  Monica hopes that the other ladies wake up.  Nina tells Monica that they are the team of the witless and something needs to be done.  Unfortunately there is not much to do because the young women are running the show.  Nina is funny she says outsmart, outwit but they cannot outwit if they are witless LOL…

Chelsea thinks that Nina is right that Kat is the weakest member of the team – she would like to vote her off but she is frightened of what will happen.

Tribal council: Jeff tells the ladies they are off to the worse start of any team.  Jeff tells the ladies he feels like he is talking to six graders.  Nina tells Jeff the problem is they are a divided team – 5 against 3 players.  Nina is being frank about how she feels about Kat.  Jeff asks Kim if the problem here is they have formed an alliance and Kim tells Jeff yes.    Jeff tells Alicia there is no girl power going on.  Alicia tells Jeff she was embarrassed about what happened at the challenge.

Kat is upset she made the team lose and she tells Jeff she never fails – Jeff is shocked and then Kat clarifies and says she never does anything that she know she won’t win at.  Kat then threw Kristina under the bus and said she could go to.  Sabrina interjects and says the problem is that they act like women.  They call someone out and then they don’t deal with it.  If they were men they would deal with it.

Nina is the second person vote out.  These women are dumb with a capital D – the men are going to pick them off one by one. Jeff tells them they have to get it together – NO JOKE!