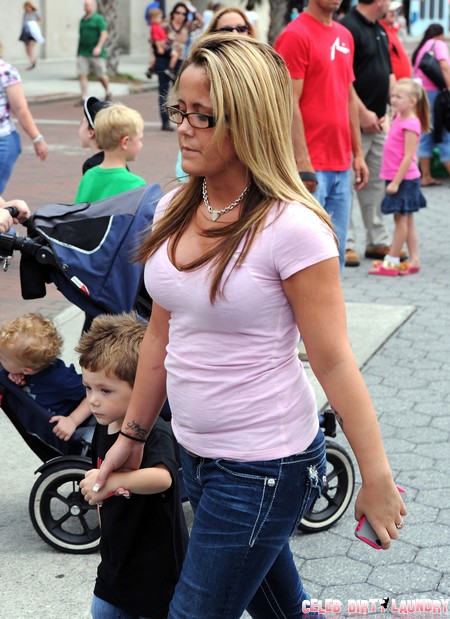 Well you guessed it right if you thought Teen Mom 2 star Jenelle Evans and Gary Head couldn’t make it a whole week without a major break up. You could definitely tell there was trouble in paradise yesterday when Gary tweeted he was heading to Wilmington to hit some clubs and party this weekend.

Then tonight Gary tweeted some pretty harsh words basically saying screw Jenelle I’m done with that crazy b****.  He also said he packed all his clothes and got his ring back. Earlier in the week Gary was at war with Jenelle’s roommate Allison and claimed she stole Jenelle’s clothes. Allison tweeted back for Gary to shut up and that he’s controlling and throws tantrums and breaks things that don’t belong to him.

Gary says he’s really done this time – but I don’t believe him – this happens every week. So far neither one has deactivated twitter all though I’m sure one of the attention whores will before the fight’s over. Jenelle said Gary was out drinking and driving which is not a smart move for the marine who just got out of being in trouble. Jenelle also called the cops on Gary which is nothing new.

Jenelle also said she was going to New York for a vacation to see Niagara Falls. She’s always full of drama and she and Gary claim they have been together since January 1st but I wonder how many times they have broken up during that period. Obviously these two idiots can’t see they are not going to have a future. I’m sure the Cops are getting tired of Jenelle crying wolf and calling the cops every time the two have a fight. She also tweeted she was going to get her son back with or without ‘you.’  I’m sure that was meant for Gary.

Jenelle needs a slap in the face with reality, and badly. Does she really think she’s able to provide a stable home environment.  Wow, in the past year she’s had a huge fight with a former roommate and tweeted naked pictures of the poor girl, done countless amounts of drugs, and claims she’s been physically abused.  Not to mention all of the breaking up getting back together with Gary confuses poor Jace.

Let’s be honest the best thing for Jace is to stay as far away from his mom and her life of non-stop drama. She will never be able to put his needs above hers.  If they do all this fighting in public on Twitter I’m sure their fights off twitter are even worse!