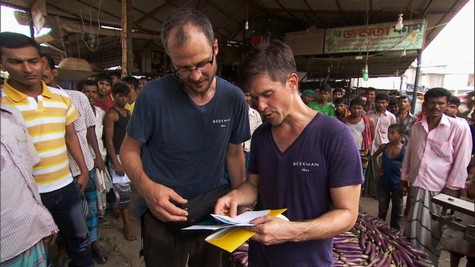 Emmy award winning, THE AMAZING RACE returns to CBS tonight with a whole new episode called, “Chill Out, Freak.” On tonight’s show the teams The teams remain in Bangladesh for tonight. Tonight on the show is one of the most challenging challenges for the teams. Did you watch last week’s episode of the season last week? We did and we recapped it HERE for you!

On last week’s episode as the team’s arrive in Bangladesh, the game got heated as one Racer’s enthusiasm pushed their competition to the breaking point. Meanwhile, one Team Friends Jaymes and James had to performed the unpleasant task  and collected dead rats from three locations and handed them over to the Rat Catcher.  In a Road Block, Goat Farmers/Life Partners Josh (left) and Brent (right) had to repair a broken down bus in order to receive the next clue.

On tonight’s show Teams crumble amidst the intense heat of Bangladesh and emotions propel one Team through the leg after they receive disappointing news from home.  Tonight’s challenge is going to be very difficult and it gets the best of many of the teams.  On a Route Marker stop tonight, teams must find the eggplant vender in the Jatrabari Boro Bazaar in order to receive the next clue.

Tonight’s episode 5 is going to be another fun one, which you won’t want to miss. So be sure to tune in for our live coverage of of the season 21 episode 5 of The Amazing Race — tonight at 8:00 PM EST! While you wait for our recap, hit the comments and let us know how excited you are about the new season of the Amazing Race?  Check out the sneak peek video of tonight’s episode below.

Tonight’s episode: Seven teams remaining on The Amazing Race, tonight we will find out if one more leaves and loses their chance at a million dollars. Bangladesh is the start of the fifth leg in the race around the world. Sad news tonight, James is on a web chat with his wife and finds out that his father has stage four cancer, but it appears that he is still going to continue with the race. James & Abba are the first team to depart, they head to a market to find a vendor that sells egg plant.

The clue tells the teams to head to a ferry next. Abbie & Ryan are heading to the market, Natalie & Nadiya are just behind them. James & Abba are the first ones to arrive at the Roadblock. Build a balance scale, where teams have to properly balance out wood and stones. It’s a tough task, but James & Abba are still in the lead.

Abbie & Ryan, Natalie & Nadiya are trying to put their balance together while Trey & Lexi have just left the pit stop and have a lot of ground to make up.

James & Abba get their next clue, it’s a Detour; Straw Dogs where teams have to untangle straw in a factory and  put it through a machine or Bamboo Dogs that teams to collect 40 pieces of bamboo and load them on a bike and drive themselves to a local construction site.

James & Abba decide to do the Bamboo Dogs, while all the other teams have yet to get to the Detour. James & Jaymes, Rob & Kelly have finally got their clue to head to the ferry to build the scale. Josh & Brent are having a hard time, they can’t seem to find where they have to go.

Natalie & Nadiya, James & James are headed to do the Bamboo Dogs Detour, while James & Abba have just finished and received their next clue, a picture of a building that is the next pit stop for this leg of the race.

Abbie & Ryan have arrived at Jute Mill to do the Detour, Straw Dogs. Trey & Lexi have made good time, they are finished the Roadblock and are heading to the Detour before Josh & Brent and Rob & Kelly.

James & Abba are team number one again and have won a trip for two to Malaysia’s rain forest. Phil asks James about his dead and wants to know if he thought about quitting but James says that his family wants him to keep going and not to quit.

Josh & Brent are the only team left at the Roadblock and are very frustrated. Abbie & Ryan have finished the Detour and have their clue to head to the Pit Stop, they arrive in second place. Josh & Brent are facing new problems, dehydration and they are in last place, but they are not quitters.

Natalie & Nadiya are the third team to arrive at the Pit Stop, while James & Jaymes forgot three bamboos and have to go back and get them, this will definitely give Trey & Lexi time to beat them.

James & Jaymes are team number six, this means that Josh & Brent are the last team to arrive but this is a non-elimination leg and they get the chance to continue. Sometime in the next leg in the race, they will encounter a Speed Bump which they will have to complete.