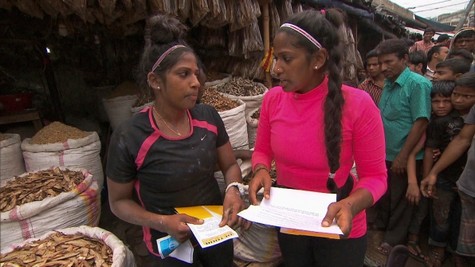 Emmy award winning, THE AMAZING RACE returns to CBS tonight with a whole new episode called, “Funky, Monkey.”  On tonight’s show the Teams are off to Bangladesh for the forth leg of the race. Did you watch last week’s episode of the season last week? We did and we recapped it HERE for you!

On last week’s show as teams continued racing through Indonesia, they discovered that it’s every Team for themselves as they encountered a Double U-Turn, and Teams started to feel the heat of the Race as their heads are set ablaze.   Teams had to dress in some ridiculously heavy traditional costumes and then roam the streets in part of one of the local customs. All the teams have problems with the challenge.

On tonight’s episode as team’s arrive in Bangladesh, the game gets heated as one Racer’s enthusiasm pushes their competition to the breaking point. Meanwhile, one Team Friends Jaymes and James must performs the unpleasant task  and collect dead rats from three locations and hand them over to the Rat Catcher.  In a Road Block, Goat Farmers/Life Partners Josh (left) and Brent (right) have to repair a broken down bus in order to receive the next clue.

Tonight’s episode 4 is going to be another fun one, which you won’t want to miss. So be sure to tune in for our live coverage of of the season 21 episode 4 of The Amazing Race — tonight at 8:00 PM EST! While you wait for our recap, hit the comments and let us know how excited you are about the new season of the Amazing Race?  Check out the sneak peek video of tonight’s episode below.

At the airport, Abbie & Ryan are booking their flight when Trey & Lexi walk in and get on the same flight – actually, everyone is on the same flight so they have all caught up with each other and it’s anybodies race in the next leg. All teams are travelling through Singapore to Bangladesh.

At the Road Block, teams have to repair one of 15, 0000 buses each that drive through the streets everyday in Bangladesh. Teams have to fill the body with putty, sand it, then remove three seats and bring them to the refurbish area to receive their next clue.

James & Jaymes are not doing well at the Road Block, they have to scrape off all the plaster and start over again. Gary is also having a hard time and tells Will that he is starting over again as well.

Gary & Will are in last place, they are still at the Road Block but are soon to finish and be on their way to the market. Trey & Lexi are just in front of them in a cab, when the car dies.

Natalie & Nadiya are at the Blacksmith shop and think they are in the lead, but Rob & Kelley have just arrived beside them.

James & Abba are collecting their rats and have a whole crowd of people following them to receive their next clue, they are on their way to the Pit Stop.

James & Abba are the first team to arrive at the Pit Stop for this leg of the race and they win a trip for two to St. James Club in the island of Antigua. Meanwhile, Abbie & Ryan are still struggling with their mattress, while Natalie and Nadiya have finished the Detour with Rob & Kelly. James & Jaymes are still at the market and just found their colored fish.

Abbie & Ryan have just finished making their mattress, Josh & Brent have just started to make theirs with James & Jaymes, Gary & Will, shortly behind them.

Rob & Kelly are the fourth team to arrive, however they took the wrong riverboat and have to go back and re-do the route to Swarighet before they can check in.