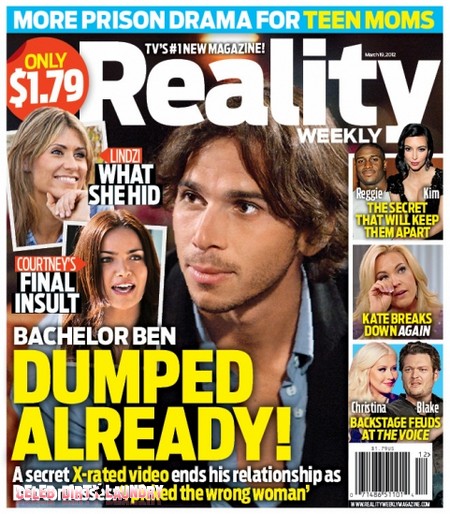 The cover of the March 19 edition of Reality Weekly exposes how The Bachelor Courtney Robertson dumps Ben Flajnik as a final insult to him and the entire stupid show!  Perfect justice – Courtney played Ben for fool and appealed to his third leg to gain favor over other more worthy contestants.  But Ben let Mr. Happy do his thinking and now Courtney has dropped him.  No wonder Ben says that being on the show was the worst mistake of his life!

This week’s episode of The Bachelor was all about the women telling all – or more like the women hatin’ on Courtney.  No surprise there.  If you missed the episode our official recap is here!  My favorite part (and there were many) was seeing Courtney pace back and forth off stage anxiously waiting being ripped into.  Girl must have been scared to death!

Courtney claimed that she was forced to defend herself but that she really intended to be nice and friendly to all the other girls. Sure… says the crocodile as she munches down the last monkey – ‘I really wanted to be friends… ’

Also on the cover we learn than Lindzi (where do they get these names?!) kept a big secret.  What could it be?  I mean she looks a bit like Maria Shriver but that is no secret…

Reality Weekly reports: When it comes to reality TV, there’s only one place you can get all the breaking news and juicy details you crave: Reality Weekly magazine! In this week’s issue: Bachelor Ben regrets his choice of a fiancée — after she dumps him shortly after his proposal.

The cover promises to reveal why Reggie Bush and Kim Kardashian are being forced apart.  I can only imagine – could it be the Reggie knows that Kim is a famewhore?  Or maybe Reggie refuses to be scammed into marriage like Kris Humphries was?

Also there are hints on the cover about feuds on The Voice between Christine Aguilera and Blake Shelton.  We cover The Voice religiously here at Celeb Dirty Laundry but have not seen any sign of tension between the two judges.  If you missed our recap of the latest episode then you can read it here.