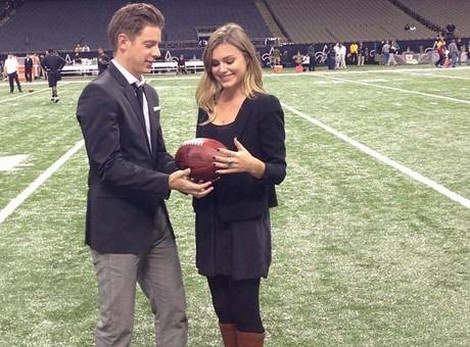 That we religiously follow the oh-so-fake cycles of The Bachelor and The Bachelorette is, certainly, a level of pitiable desperation. That we follow the lives of the famewhores who lose the show, however, is purely pathetic and addicting. Emily Maynard’s season of The Bachelorette was imbued with tears, faux compassion, and her daughter, Ricki Hendrick. No one was too surprised when she split from winner and fiancé Jef Holm earlier this fall, but the bromance that followed between Jef and runner up contestant Arie Luyendyk Jr is genuine and will probably last a lifetime. So we know that Jef’s new relationship is serious, because the girl’s already gotten the BFF thumbs up!

Jef met Katianna Bear, who is five years his junior, about a month ago in New Orleans. The two hit it off and have been attached ever since. The blonde posted a photo to Instragram, showing the two of them in a football stadium in their Sunday best. A friend of Jef confided, “They did meet in New Orleans. All I can tell you at this point is that Jef likes her a lot. He even flew her to Arizona to spend a couple of days with him while he was there.” Earlier today, Jef posted to his Twitter, “Just another week of dating rumors. I’m single, & staying skingle for a while I can assure you.” But celebs always lie, right? But he also tweeted, “I should’ve kissed you, I should’ve pushed you up against the wall . . . “ Which is really mixed messages. Unless it’s song lyrics? Well, Jef is a human and humans date, and they lie about who they’re dating. End of story?

Now I must pose a question: Jef is, at most, a minor celebrity, having been shown on twelve episodes of a waning TV reality show. If anything, Emily is the celebrity, being the bachelorette, and all. So at what point does Jef stop being a celebrity and recede back into his weird entrepreneurial-hipster-Mormon life? Will he ever? Let me remind you, the most exciting thing he ever did was break up with a fame whore. Can’t he just disappear into the sunset? Is this new relationship newsworthy? Two nobodies in love? Please let us know, because in this crazy world of real actors, reality TV stars, celebrities, celebutants, internet sensations, and TV personalities, it’s hard to keep up! Are you over Jef, or is he still relevant?

More to the point, since you are reading this post, Jef is relevant to YOU.  So we have to ask, what does Emily Maynard think about her former fiancé being hooked up already with a hot hottie?  Let me tell you, she doesn’t care!  She never liked Jef in the first place and only accepted his proposal to satisfy her contract with the show.  In fact, Emily’s first choice was Arie Luyendyk Jr., but he wanted no part of Emily and her shtick.  If you think that romance and love is even possible on a reality show featuring famewhores then you ought to take your TV and donate it to the Salvation Army for Christmas and come back to the real world for the New Year.