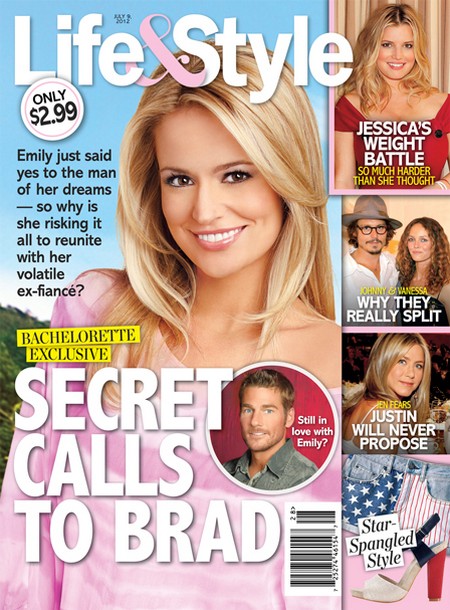 The current issue of Life & Style features the cover story ‘Bachelorette Exclusive: Secret Calls To Brad.’ The magazine claims that The Bachelorette Emily Maynard and Brad Womack have been hooking up again.  Even thought Emily just said YES to the man of her dreams she is risking all to reunite with her volatile ex-fiance Brad.

Apparently although Emily has gotten engaged to her final Bachelor on the Caribbean island of Curaçao in early May 2012 she is having cold feet.  Emily is running to Brad for support and counseling.

“They call and text each other,” the source confirms to Life & Style. “They weren’t on good terms after their painful breakup, but Brad says they’re talking now, and it’s throwing him for a loop. It’s weird timing, but if anyone can understand what Emily is going through, it’s Brad.  If Emily doesn’t really know her new fiancé, like she didn’t know Brad, then I can see how she must be confused.”

Although, when you watch the show it seems like Emily has a lot of time to make her decision, according to former Bachelorette Jillian Harris, you get a total of 20 hours with him. In that 20 hours you have to make a decision of who you want to be your fiance, not much time.

I imagine that is the reason these Bachelorette/Bachelor engagements rarely last.   How can anyone make a decision on a life partner after a few hours?  What do you think, can anyone find love on a reality show?  Would Emily be better off with Brad?

Meanwhile her ex-fiance’s parents are not pleased that Emily is appearing on The Bachelorette and they are crying that she is a money grabbing gold-digger!

Also included in this week’s issue the magazine has the scoop on why Johnny Depp and Vanessa Paradis actually split up.   It will be interesting to see their take since there have been rumors that Johnny had an affair, Vanessa had an affair and even that Johnny was juggling two women.

To find out all the details, make sure to pick up the current issue of Life and Style, on newsstands today!