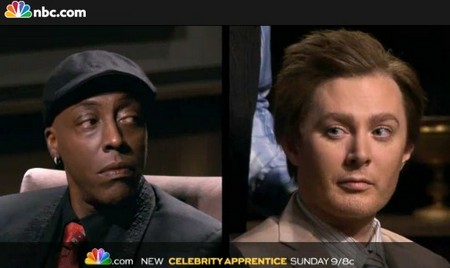 The Celebrity Apprentice returns tonight to NBC with a whole new episode called ‘And The Winner Is’.  Stand by as we live blog the episode with all the up-to-the-minute details.

On last week’s episode Donald Trump attacked Aubrey, and told  her that she was transparent and he FIRED here.   When Aubrey left the boardroom she said, “anyone that calls me transparent, then f*uck them”. Wow, leaving the boardroom and then giving Donald a big F*ck You, what a bitch!  Aubrey should have been sent home week’s ago.  If you missed last week’s episode you can read our full and detailed recap here.

On tonight’s episode The finalists scramble to finish in time for their celebrity charity event, and for the first time ever, the two finalists must work together to make sure their variety show goes off without a hitch. With 10 Celebrities performing, it’s the biggest finale event to date. In the end, Donald Trump makes his final decision, live – who will be fired, and who will become The Celebrity Apprentice. Boardroom advisors Ivanka Trump and Donald Trump Jr.

We posted a spoiler for tonight’s episode and if you want to know who our snitches tell us is going to win tonight’s episode go here.  We also conducted a poll today and over 75% of our viewers think we will see Clay Aiken being crowed The Celebrity Apprentice.  There is still time to vote, go here.

We will be live blogging the episode with all the up-to-the-minute details at 9PM EST.  Don’t forget to come back to this spot and refresh often to get the most current updates!

And here we are watching Donald on the phone looking for the world’s fastest driver – and Mario Andretti pops up!  Mario wants Don that driving with him will mess up his hair!

We are then treated to some season highlights.

Now we see Team Arsenio in prep for the task – we watch Magic Johnson on video tell us that he is friends with Arsenio.  He couldn’t have shown up in person?

Team Clay shows us Clay bitching already… Clay is micro-managing his crew – and they don’t appreciate it one little bit.

Donald throws in a boost for his kids – telling us what an amazing job they’ve done this season.  What?

Back to Clay continuing to bother about every little detail.

Arsenio is chatting with his team – Paul looks at him as a son now… Oh Oh… Arsenio is in trouble.  Arsenio wants his room to have a tone that reflects him – he doesn’t want a roast – Clay will have a feel-good event and he will have a roast??  Arsenio says no way.

Clay is iffy about accepting the design – he fears it will be cutting it too close since it is so detailed.

Aubrey is getting pissed at Clay – and I have to agree – Clay is more about micro-managing than about actually getting stuff done – I could never work for such an a**hole.  Clay won’t let anyone have any authority at all – responsibility without authority is thankless.  Clay is a prick – let’s face it.

Arsenio might lose the competition but he is the superior person in my opinion.

Clay is having everyone paint his background mural – even Penn who has schlepped Teller along for the ride.

Now they are going back for a meet and greet with those that got the boot.  Now they are making fun of Lou Ferrigno with his 110% but Donald thinks he is smarter than Lou.  I doubt it.

Victoria Gotti says that Lisa and Aubrey were stupid bitches.  The audience cheers!!

Dayana sulks that her charity money went to the other team.

Tia asks the crowd who was a bitch – and the crowd responds ‘Aubrey.’  No brainer here.

George is classy as usual.

Back to the teams prep.  Looks like Clay’s team is doing better.  Lisa actually donates $10,000 to Clay’s team.  WTF?  With helpers like that Arsenio may as well go home now.

The parties have started – Clay’s carnival is working – of course he has Penn & Teller there.

Arsenio’s party is much more laid back – more traditional.  Whoopi Goldberg is coming to help.

Now Donald – who they all idiotically refer to as Mr. Trump – is being led around the parties.

Clay is trying to Mr. Trump that Aubrey can’t upstage him – Clay is in charge.

Arsenio finds that he is too busy – too many tasks to do while he is squiring Mr. Trump around.

Now the dividers are down and we are in one single joined theater.  Clay says it is like the Berlin Wall has fallen.  Not quite Clay, not quite.

Aubrey tries to defend her repulsive behavior – she says that she wants people to leave her feeling good.  The only good feeling that people get when the leave Aubrey is due to being unable to hear and see her.  She is a pig.

Lisa now is defending herself.  There is no defense – Lisa is a rude bitch and FUGLY.

Clay’s ad is shown first and it is really good.  Next is Arsenio Halls’ turn and it is good too.  Arsenio has a comedy presentation for the group.  First up is Adam Corolla.  Paul comes out and starts talking and the audience seems to enjoy it.

Lisa gets up and starts to talk about Clay Aiken being a gay contestant and some off-colored jokes.  Last up for his stand-up is Arsenio and he says it has been 10 years but he is feeling comfortable.

Clay is up and he says he is tired of being the runner up and he does not want to lose.  Dee Snider and Debbie Gibson are singing and then Aubrey O’Day came on singing ‘I will survive.’  Penn and Teller  perform.  At the end Clay, Aubrey, Dee and Debbie sing again.  I have to admit it was fantastic and clearly better than Arsenio.

Lisa tells Donald that Donald was a good leader.  Donald asks Lisa if she donated $10K to Clay and she says yes.  Adam tells Donald that he got along well with Arsenio and he is honored he chose him.   Teresa says Arsenio has no weakness.

Aubrey tells Donald she hopes Clay wins.  Aubrey insinuates that she does not like Arsenio.

Donald thanks everyone for participating.  He sends them all out of the room except Clay and Arsenio.

Donald tells Clay and Arsenio they have both been amazing and it will be a very tough decision.  The end of the taped show is over.

We are now live and Donald introduces the two finalists, Arsenio Hall and Clay Aikens.

Dee votes for Clay to be Celebrity Apprentice

Donald asks why Clay thinks he should win and Clay tells him because he proved he was a leader and his mother is there and he does not want her to see him come in as a runner up again.

Donald tells Lisa to ask Arsenio a question.  Lisa says, ‘Arsenio am I attractive?’  He says not only are you visually attractive, you are intelligently attractive.  Dayana asks Arsenio if he finds Lisa attractive.  Arsenio says he stands by his previous statement.

Arsenio tells Donald it is very important for him to win.  He has always been number 2 and now he needs to be number 1.

Ivanka compliments both of the players.  She tells her Dad it is a tough choice.  Eric Trump chimes in how tough it is.  Donald then says he has never been so torn.

THE WINNER OF CELEBRITY APPRENTICE IS ARSENIO HALL