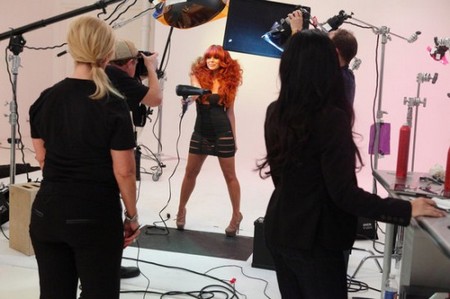 The Celebrity Apprentice returns tonight to NBC with a whole new episode called ‘Blown Away.’ Stand by as we live blog the episode with all the up-to-the-minute details.

On last week’s episode the celebrities had to write a 90-second jingle for Good Sam’s Roadside Assistance program. The project managers for week were Arsenio Hall and Dayana Mendoza.  Dayana’s team lost.  Donald told Dayana he thought she was a fantastic person.  He then told her she is fabulous and had an amazing career but she is fired.  Lisa smiled and Clay showed no emotion.  If you missed the episode you can read our full and detailed recap here.

On tonight’s show the remaining five celebrities embark on their penultimate task, to create a print ad campaign for the new “CHI Touch” Digital Touchscreen Hair Dryer. With nothing left to lose, both teams go all out, but in completely different directions. The executives pick their winner, and Donald Trump fires another celebrity. Their victory is short lived, when the Final Four are summoned back to the Boardroom, where Mr. Trump sends them to the most important job interview of their lives.

Returning Celebrity Apprentice, John Rich, and runner up, Marlee Matlin grill the celebrities and make their recommendations to Donald Trump, who is left with a difficult decision: who will be the final two. Boardroom advisors Donald Trump Jr. and Eric Trump. Special guests John Rich and Marlee Matlin

We will be live blogging the episode with all the up-to-the-minute details at 9PM EST.  Don’t forget to come back to this spot and refresh often to get the most current updates!  While you wait for the recap you can see a preview and spoilers of  tonight’s episode here!

RECAP: Lisa, Teresa, Clay, Arsenio and Aubrey are the final celebrities and anybody could win.

Lisa is thrilled that Dayana is gone and Teresa is worried that Lisa will now come after her.

The final five are in front of Trump to get their next task. They are in Hearst Towers, one of the most prominent and important publishers in the world. This task involves impressing Elle magazine when they design an ad for their new CHI Touch Hair Dryer.

The dryer was designed with NASA technology and teams must remember that Elle is sexy but not vulgar. Clay laughs at Lisa while Aubrey is gets hit on by one of the chief executives. Arsenio agrees that Aubrey is beautiful girl and would be into her himself if he didn’t hate her so much.

Aubrey wants to do a futuristic theme with zen and Teresa loves it. On team Forte Lisa is thinks the product is lightweight and not futuristic at all.

Forte decides to go with an “under the surface” idea and both teams have to negotiate for models. No surprise that Aubrey immediately wants the redhead model because the executive loved her fiery red hair.

Forte does not really care about what models they use, so this is going to be really easy. Lisa plays with Teresa’s mind; whatever models Teresa likes, Lisa pretends she likes them too. Arsenio can tell what Lisa is up to.

Teresa is shocked at how dirty Lisa is sinking to and the rest of the team is freaking out. Clay is behind the scenes of Forte just having a good laugh because he knows that the models mean nothing to Lisa.

Lisa is the biggest bitch, but is it for real? Teresa is a bad negotiator, although she claims to be a tough one.

Clay and Lisa are laughing until they cry, because they don’t care about which model they get. Unanimous is not happy with their Project Manager.

Eric comes to check on Unanimous  he realizes  Teresa is a really bad negotiator.  He can tell Aubrey has taken over. Eric likes how persistent Aubrey is but Teresa is the project manager not her.

Lisa and Clay don’t know anything about fashion so Lisa takes one of the modesl with her to Lord and Taylor to pick out the clothes. Meanwhile Aubrey is taking over at team Unanimous.

Clay is overwhelmed at the photo shoot. He really replies on Lisa.

Arsenio helps with the art direction of everything while Aubrey offers to be the  model because she has fierce hair.

Clay has to go on with the shots without Lisa because she is taking too long but when she shows up, it is all gravy. Having been in front of the camera so much, it was fun for him to step back but he got so upset that he was doing all the work while Lisa just chilled.

Don Jr. shows up and Lisa goes for flattery to impress him as she explains what their idea is. Don thinks it is hilarious that Clay is picking out the shots of women and is so overly confident. Over at Unanimous, Teresa is criticising Aubrey for letting it all hang out, claiming that she has no morals.

Aubrey, having been in Elle under the worst dressed celebs is happy to be the new model and she is taking it way too far. Teresa is talking about how she is busting her butt, lies and how Arsenio is doing nothing to show that he deserves to be the winner.

Time for the teams to present themselves and Aubrey looks extra flashy for the executives. Arsenio has faith in himself and Aubrey but not so much in Teresa who sucks at presenting the ideas that they have come up with. She’s much like a babbling idiot; thank God that Aubrey is a favorite.

“Be at peace with the future of your hair” is the slogan for Unanimous and of course, Aubrey’s photo comes up first. Arsenio is the spokesperson for the volume level of the dryer . Aubrey believes that she saved the day.

Time for Forte to wow the executives. “More than just a new pretty face” is their slogan. They like Teresa’s team and the presentation but they felt she lacked passion.

The executives liked Lisa’s presentation and they really like the back cover. But they thought the clothing was a little dated and the presentation lacked a little enthusiasm.

The executives thought that both teams did a good job but they did feel strongly that leads us team won.  Donald congratulates Lisa and tells Lisa and Clay to leave and go back to their suite.

Aubrey he claimed that they did not get to people they wanted in the negotiation.  Arsenio tells Donald they did not get what they wanted and they had to regroup. Donald asks Teresa who she would fire.  Teresa says Arsenio because he didn’t add much.  Arsenio defends himself and claims he did a lot of things Teresa couldn’t do.  Arsenio is offended because he doesn’t think Teresa is qualified to judge his work.

Teresa asks Aubrey if she thinks Arsenio brought anything to the table.  Arsenio tells Teresa not to Throw him under the bus because he will back it up and hit her.  Teresa claims Aubrey and her ran the task and Arsenio asks her to tell him what she added to the task.

Aubrey tells Donald that Teresa once everything so badly.  Donald tells Teresa in all fairness she was the project manager and the execs loved Aubrey and Arsenio.  Donald fires Teresa!

Arsenio and Aubrey agree to go in the room where Clay and Lisa is and have Arsenio say Aubrey was fired.  Lisa does not buy it and Aubrey walks in.

The four of them are celebrating being the final four.  the phone rings and Donald wants them back in the boardroom. Donald congratulates them that they are the best of the best and they made it to the final four. Donald tells them they’re about to do the most important interview of their life. They are about to meet with John Rich and Marlee Matlin at the end of the interview to people will be fired.

Donald wishes them all good luck.

Donald comes in to meet with John Rich and Marlee Martlin.  John tells Donald that since doing The Celebrity Apprentice everyone recognizes. Donald of them how they like his final contestants.

Marlee thinks Aubrey is stunningly beautiful and she’s young, but she thought she was really nervous.

John asks Aubrey how much money she won for her charity.  John asks her why she did not get money from Diddy and she asks if he knows she was fired.  Something that Aubrey is a chess player and she thought she was playing him. But she’s little transparency thinks.

Marlee thinks Clay is very sweet and he is really genuine about his charity. But she wonders whether Clay is a follower or leader.  John accuses Clay of playing it pretty safe.  John asks Clay if he is going to win the show and he says he absolutely well.

Donald asks John what he thinks of Arsenio.  John tells Donald you feel good when you’re around him.  Marlee asks Arsenio how I got along with everyone and Arsenio admits that he got into an argument with Aubrey and he shouldn’t have.

Marlee says Lisa talks a lot and even though she is deaf she can hear her.  John thinks that Lisa is a tough women.

All the four final contestants think that they did a good job in their interviews.  Donnell asked Lisa why she thinks she should win. Lisa tells him she is a celebrity apprentice because she can hold her own she fesses up when she’s done something wrong and she feels she is strong enough for the job. Donald tells Lisa that John and Marlee don’t feel she can control her emotions. Lisa thinks they’re wrong and she can control her emotions.

Donald tells Lisa – John and Marlee felt strongly that she didn’t have her emotions under check and double has to agree Donald fires Lisa.

He then tells the contest that one more contestant is going to be fired.

However, they will tells us next week when the show is continued.  Apparently, Donald fires someone else during the first 10 minutes of next week’s episode.