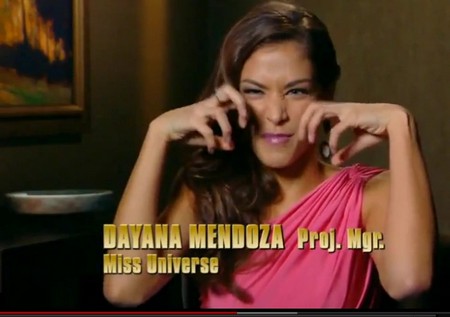 The Celebrity Apprentice returns tonight to NBC with a whole new episode called ‘Jingle All The Way Home.’  Stand by as we live blog the episode with all the up-to-the-minute details.

Last week we had another episode filled with drama.  Lisa and Dayana got into it again and Penn said he felt that Lisa was threatened because Dayana was beautiful.  The project managers last week were Clays for Forte and Aubrey for Unanimous.  The winning team was Unanimous – Clay’s team lost.

The executives liked some elements of both presentations but liked Aubrey’s a little bit more.  The one thing the executives hated about Clay’s presentation was the slogan and Penn was the person responsible for it.  For this reason Donald fired Penn.  If you missed the episode you can read our full and detailed recap here.

On this week’s show the celebrities must write a 90-second jingle for Good Sam’s Roadside Assistance program. The project managers the week are Arsenio Hall and Dayana Mendoza.  From the preview I have seen, tonight is going to be a really intense episode.   Both Clay and Lisa go off on Dayana and at one point Lisa tells Donald Jr.  that Dayana is a bitch, yikes!  Lisa did not like it when Donald Jr. walked in and asked how they were doing and Dayana responded,“Clay knows what he is doing and Lisa is loud as usual.” A correct description I think, but Lisa was less than pleased about the comment.  Expect lots of fireworks tonight!

We will be live blogging the episode with all the up-to-the-minute details at 9PM EST.  Don’t forget to come back to this spot and refresh often to get the most current updates!  While you wait for the recap you can see an extended preview of tonight’s episode below!

RECAP: Team Unanimous is shocked that Team Forte returns without Penn, but Clay is not that unhappy about it because he wants to win and a strong player out is actually good news for him.

The teams are down to the final six and Trump tells them that they have done an amazing job. Trump loves charity and a company the exemplifies that is Good Sam. Teams will have to produce a sixty second jingle and perform it live. The Project Manager for Unanimous is Arsenio, which doesn’t make Aubrey very happy. The Project Manager for Forte is Dayana, which is really surprising since she knows nothing about music. The winner of this task will win $20,000 from Trump, $25,000 from Good Sam plus the proceeds from their mascot will also go to the charity.

Dayana is having a hard time understanding the difference between a “Jingle” and “Jingle All The Way”.  When Clay tries to give some input, Dayana suggests that they call Debbie Gibson, to which Clay just rolls his eyes.

Aubrey wants the women to wear cheer leading outfits and have Arsenio tap dance. Arsenio is very direct with her that he is not going to have her stereotype him by having him tap dance, there is a long moment of awkward silence. It’s early, this is going to be a very difficult task.

Team Unanimous is at the recoding studio and Aubrey is already getting mouthy, she and Arsenio are clearly not getting along. Aubrey claims that she can write a song in two seconds and they should otherwise be concentrating on the performance, Arsenio disagrees. The executive come into the studio, Aubrey asks him if they can be creative with the jingle and he tells her to just remember that families are listening to this and it is more important to focus on the mascot which is their brand. The musicians arrive and Aubrey jumps right in and tells them that what she wants, but Arsenio respects her because he knows that she has the experience to do it. Arsenio is basically kissing Aubrey’s ass to keep her quiet, but you know that when you give her an inch she is going to take a mile. Arsenio delegates Aubrey and Theresa to work with the Graphic Designer and as soon as he turns his back, Aubrey is working with the background singers. Donald Trump Jr. arrives to listen to a first sample of the jingle, he thinks execution is going to make it or break it. Aubrey takes Donald Jr. aside and bad mouths Arsenio, she tells him that he is not creative and obviously they don’t get along, but Donal Jr. is not impressed that she cornered him. Arsenio sends Aubrey and Theresa, along with the dancers, are heading to rehearse for the performance when Aubrey tells Theresa that they should call him for direction. Aubrey is on the phone with Arsenio and when he starts to give ideas we see Aubrey saying to the camera “homeboy is shifty and needs to grow some balls”. At the studio, Aubrey takes complete control over the rehearsal and when Arsenio comes in, she tells him that she already sent the mascot away. Aubrey did nothing that Arsenio wanted, she did everything she wanted to do. Meanwhile, Theresa is nervous that they won’t even be able to put on a performance because Arsenio and Aubrey have been fighting all day.

Team Forte is working on the jingle and every time Clay tries to come up with an idea, Dayana gets frustrated. The executive now visits them and he gives them the run down on Good Sam. Clay asks him how far they should go with the jingle and he tells them not to play it safe but remember to keep the branding their first priority. Clay wants to get things moving before the musicians arrive and Dayana just keeps making stupid suggestions. Lisa is worried that a lot of time is being wasted because Dayana doesn’t understand music styles. Finally Dayana agrees with the sixty style, but asks the musicians to put a little Pink it into it. The team is working on catchy phrases and rhymes and Dayana doesn’t grasp it, she doesn’t even know what a rhyme is. Lisa jumps in to write and Clay does the singing. Dayana interrupts Clay and tells him how to sing, someone is going to lose it on this team. Lisa does some of the voice overs and Dayana interrupts her as well and tells her to sound cuter. Clay sums it up, Dayana is not the blind leading the blind, she is the blind leading the seeing. Clay finds Dayana is the most frustrating person to deal with, she keeps throwing in the dumbest ideas. Donald Jr. arrives to check on the team and Dayana tells him that she is lucky to have Clay on her team, to which Lisa interrupts and adds in that she is lucky the two are on the team. Dayana tells Donald Jr. that Lisa has just been loud, that is quite the cheap shot because this time, Lisa has actually been on good behaviour. Lisa has a complete breakdown, Clay jumps in and defends her, then Lisa calls Dayana a “little bitch” in front of Donald Jr., screams that Dayana is out of line and walks out. Lisa actually does return to the room and Dayana is in work mode, while Clay is just watching in. Lisa and Clay are worried that they are running out of time, Dayana tries to speak to Lisa but if she doesn’t say she is sorry, Lisa doesn’t want to speak to her. Lisa goes on to call Dayana a “bitch” two more times, then Clay tries to interrupt without any luck. Clay is trying to practice the jingle and Dayana tells him what to do, the two get into it and Clay is shocked that Dayana would tell him what to do when he does this for a living. How Clay is able to just go on and practice without physically throwing Dayana out of the room, is beyond me.

It’s time for the live performances and Clay overhears Aubrey singing and finds theirs too contemporary. Team forte is on first and they do a very good job, but Dayana is back stage sulking that she was not included in the live performance. At the end, Dayana comes out on stage at the end and thanks all the dancers, but her appearance on stage is awkward and was not required.

In the boardroom, Arsenio is confident and when Trump asks if he was nervous that Clay was on the other team, Arsenio says no. Trump asks about the conflict between Arsenio and Aubrey and Arsenio says there is always a conflict because she has a strong character. Theresa tells Trump that she thought Arsenio did a good job.

Trump moves to the other team and asks Lisa who should get fired if they lose and Lisa says Dayana. Lisa goes on to explain that Dayana did not contribute to this task, she was unorganized and horrible. Lisa goes on to say that Dayana insulted Clay’s ability and ignored the fact that he is in the industry. Dayana tries to defend herself and basically tells Trump that they both were not trying to work with her.

Donald Jr. jumps in and asks Dayana why she cut off Lisa right in front of him and she blames it on Lisa always picking on her. Dayana and Lisa go back and forth with the usual insulting each other and Trump actually looks like he is enjoying himself.

Aubrey decides to put her two cents worth in if though it is not her business or her team.  Aubrey is again standing up for Lisa.

Dayana tells Lisa her big mouth is not going to help her.  Lisa tells Dayana this is not Celebrity Miss Universe, this is Celebrity Apprentice and tells Dayana she does not belong here.

Donald says Dayana seems very cool – Donald asks Arsenio if he would like to trade Aubrey for Dayana.  Arsenio says he will keep Aubrey.

Tonight has become the Lisa show – attacking Dayana.  Lisa keeps losing her cool.  She tells Dayana she has no respect for her.

Clay says there is not much that Lisa has said that she disagreed with but she does disagree with the way she said it.  Clay was frustrated with Dayana.

The execs thought Clay’s singing was amazing, the jingle had a lot of energy.  The theme was a little safe and conservative and the branding was not there.  He was disappointed that Dayana was not there.

The execs thought Aubrey’s jingle was very catchy and they liked the mascot.  He thought it was bit too sexy for his demographic and he would have liked to have seen Teresa contribute more.

Donald asks Clay if he respects Dayana and Clay responds that not after this task.  Clay felt Dayana tried to micro-manage him.

Donald tells Dayana he thinks she is fantastic person.  He then tells her she is fabulous and she has an amazing career but she is fired.  Lisa smiles, Clay shows no emotion.