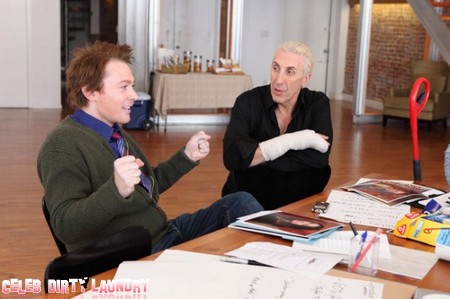 The Celebrity Apprentice 2012 returns tonight on ABC with a new episode called ‘I’m Going To Mop The Floor With You.’  On last week’s episode Donald decided to fire not one employee but two.  One of them was no surprise,  Michael Andretti the son of famous race car driver Mario Andretti.  Michael added little to the competition he rarely talked nor did anything even remotely interesting.  It was a week when it was a challenge that dealt totally with cars and Michael did not step up and so it was pretty much a no-brainer and he had to go.

The second casualty last week was Adam Carolla.  Adam was the Project Manager and he refused to bring anyone in the Boardroom after losing, so Trump decided to fire him too.

On tonight’s episode the teams must write, produce, and edit a viral video for the O-Cedar Pro-Mist Mop. The men turn on each other, when one half tries to protect their Project Manager. The women’s team goes out on a limb with a risqué concept.  We have heard a rumor that Lou screws up big time in tonight’s challenge. In a dramatic Boardroom, one more Celebrity hears The Donald’s fateful words: “You’re Fired!.”  The Boardroom advisors tongiht are: Donald Trump Jr. and Eric Trump.

Meanwhile last week Donald‘s sons favorite pastime – shooting helpless, defenseless animals and then posing with their dead carcasses – has come back to bite the Don where it hurts … his bank account.  You can read more about the story here!

We will be live blogging I’m Going To Mop The Floor With You with all the up-to-the-minute details at 9PM EST so make sure to come back to this spot and watch the show with us.   Make sure to refresh often so you get the most current info!  While you wait for the episode you can catch a sneak peek of tonight’s episode below!

Tonight’s recap:  When the men’s team gets back to the  suite, there is some resentment because Lou has not been sent home.  It was not Lou’s fault it was Adam’s fault he chose to not bring anyone back to the boardroom.

Debbie is excited to go to Children’s International with her $50,000 winning check.

At their next task, Trump asks Arsenio how he felt about Adam’s refusal to bring two people to the board room.  We can tell Arsenio thinks it was a stupid move by Adam.   At the New York Public Library, they learn that their task is to make a viral video about a mop.

Unanimous chooses Lou for their PM they want to see him step up to the plate.  Forte chooses Tia since her ex was in the commercial business so she feels like she has and advantage. The winning team’s charity will get $50,000 The boardroom advisors will be Donald Jr. and Eric will be by his side.

Lou has volunteered to flex his muscles in the commercial. This is a ProMist mop that they have to make the video for.

The men want to use the product as the hero and they are reminded that viral video is the best way to get the ideas out there. Lisa comes up with “what’s your number?” as in how many mops have you used and Tia is in love with it.  Lisa is actually shocked at how sexual Dayana can be when talking about a mop.

Clay feels like Penn goes in to each task already thinking about the board room and can be condescending. He frustrates a lot of people and Clay feels like they are setting Lou up to fail and it is “frustrating the hell” out of him.

Arsenio respects the way that Clay handles Penn and risks verbal assault; Lou feels great that Clay stood up to Penn as well. “I’ll mop the floor with you” is what the guys are working with. Over at Forte, Debbie gets pissed when things don’t go her way yet Patricia knows that Tia is the PM and respects that.

Penn is still super pissed over Clay speaking up but he just needs to put his pride aside and just play along. The one thing that stands out is how tight Aubrey and Lisa are and that can cause some conflicts amongst the women.

Clay said they thought perhaps it would good if Lou danced the with the mop and just let loose.  As Lou is dancing he falls.  Clay asks if it was real and he says yes.  Eric comes in and sees how Lou is doing – Dee tells Eric that Lou has been dancing and they think his video will go viral.  Lou knows he has to step up to the plate.

Over at Forte Tia is looking at the shots – she has hours of footage that she has to decide on.  Donald Jr. walks in and Tia is determined not to let Donald Jr.  see the tension among the girls.  Tia tells Donald Jr.  They are trying a more risky theme.   Lisa is writing the script for the video.  Although the girls are trying to hide it Donald Jr. Feels the tension in the room.

Debbie Gibson and Aubrey are going over the script.  Debbie feels the team has a lot of creativity.    Dayana tells Tia that she can introduce them.  Dayana wants to know how she is going to be incorporated.  Tia goes to see Debbie and asks if they are going to incorporate her.  Lisa comes over and tells everyone that they don’t have to incorporate everyone in the presentation.  Lisa says she is sick of the egos and sick that Dayana always wants to be in the front.  Patricia feels each time Dayana steps up she gets shot down.

Dee is really anxious to start editing – he has never edited before but he is sure he can do it.  Penn is still upset he feels like he has been treated condescending.  Clay thinks that Penn does not want to work unless he is front and center.  Clay is trying to talk to Penn – but he feels he is getting nowhere with Penn and there is no solution.

Lisa tells Dayana it would be nice to have flowers and Lisa asks Dayana to handle it.

Time for the men’s presentation.  Lou tells the people that he never would believe he would do a video with a mop and he hopes the video goes viral.  The video is a hoot.   Clay thinks that Lou did a great job.

Tia is doing the presentation for the women.  Aubrey and Debbie are doing a skit presenting the video.  The video is really good.

Boardroom:  Donald comments that Lou has finally stepped up and was project manager.  Lou tells Donald that he feels they won.  Lou tells Donald his team supported him.   Paul tells Donald he thinks they won and he thought Lou was the star and he is a fighter.  Clay tells Donald Lou is the most committed person to a task and he blew him away.  Clay was really impressed with Lou.

Donald asks Tia how she did.  Tia felt the ladies team did great.  Tia feels that Lisa was the star.  Lisa tells Donald she never felt that Tia had a true handle on the situation, she feels Tia is an awesome person but she fell short sometime.  Tia respectfully disagrees with Lisa.  Dayana tells Donald that Debbie was stressed out and emotional.  Debbie says she was getting a little frustrated because Tia took on the role of director and she was not getting a lot of answers.  Tia says Debbie should chill out.  Lisa, Debby and Aubrey feel they had to take on the task.  Lisa says she is always frustrated because when there is a task the tasks fall to the creative people and those people are herself, Debbie and Aubrey.  Lisa claims Teresa is less creative and Dayana is the least creative.  Lisa thinks Dayana is a beautiful person but Lisa has never heard a good idea coming out of her mouth.

Tia tells Donald their concept was ‘What is your number?.’  Tia thinks they won.  Patricia did not like the concept  – she felt they did not do what the executives wanted.

Penn tells Donald that their concept was ‘I’m Going to Mop The Floor With You.’  Penn thought he was very very funny.  Arsenio loved the concept.  Eric asks if Lou thought it was a mistake that only he was in the video.  Lou explains he want to show that he could step up.  Donald asks if Lou should go home if they lose.   Dee says Paul Sr. should go home because there was really nothing for him to do on this task.  Arsenio would fire Paul Sr.  Clay thinks Paul Sr. is a big contributor and valuable.    Lou says he would bring Paul Sr. and Penn.  Lou says Penn is ‘a bull in china closet with a superior attitude.’  Lou feels Penn does not have enough compassion for other people.  Clay says that Penn admitted he does not like NOT to be in charge and he feels when Penn is not in charge he disengages.  Dee says Penn is an encyclopedia of knowledge – but he has an emotional disconnect on the task.  Clay feels Penn brings negative energy.  Arsenio feels Penn and Clay have been butting heads and he was proud of Clay that he confronted Penn.

The executives thought the women worked great together and they did well promoting the brand.  The execs thought that Lou was entertaining and they loved the tag line.  They thought it had a lot of the key features.

The winner of the task is the Men’s Team and Lou has finished $50,000 for his charity the Muscular Dystrophy Organization.

The men are really excited and Clay wants them to turn the TV and watch the women self-destruct.  Dayana did not like the theme from the beginning.   Lisa feels that the creative people should not be fired because Tia approved the concept.  Dayana says every idea she gives is never taken.  Aubrey  tells Donald this was the least enjoyable task she has worked on.  She felt that Tia managed with emotions rather than a business sense.  Tia disagrees she feels she pulled the trigger decisively.   Patricia feels Lisa brings more to the team than Tia.  Lisa feels that Dayana contributed the least.  Aubrey would fire Tia because she was the project manager.  She feels that Dayana is the weakest player.  Patricia thinks the weakest player is Teresa.

Teresa thinks Patricia is the weakest player.  Aubrey feels that the problem with the team is the women are catty.  Aubrey is not nice she called Tia 50 years old and Tia said I am in my 40’s.  The remark by Aubrey was cruel.  Aubrey feels she is overshadowing Tia at 27.  Lisa agrees that Aubrey works her butt of for project managers.  Tia feels Aubrey always likes to be the center of attention.

Arsenio who is watching with the men feels that Aubrey is self righteous.  Tia decides to take responsibility because she made all the decisions and approved everything.  She chooses to bring no one back with her.  Donald fires Tia!