‘The River’ Season 1 Episode 4 ‘The Better Man’ Review — The River Kills, But It Also Rewards 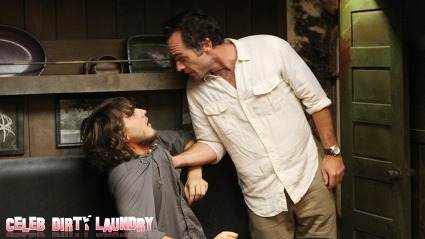 The search for Dr. Emmet Cole continued on last night’s episode of The River when the crew found themselves — as usual — in a less-than-ideal magical predicament. The crew spots a body, wrapped tightly in mysterious vines. We learned at the beginning of the show that these vines are, like most things in the jungle, not all they appear to be. As they examined the body from afar, they determined it to be Dr. Emmet’s cameraman, an overly ambitious character who would do anything “to get the shot.”

Then things started to get weird. The cameraman wasn’t dead. He’d been hanging there — neither dead nor alive — for months. They got him out of the jungle and Lincoln managed to get him stable, but the river (or, as Paulina calls it, The Bouina)  was not happy with them for taking the man who, as we later learned, committed a great offense: captured footage of an ancient elder funeral. That, my friends, warrants a MAJOR curse.

Despite Emmet’s warning, he followed the elder — who was journeying into the jungle to complete his life’s voyage — with his camera. Wrong move. Angry, the elder’s spirit “cursed” him to the life of The Hanged Man — a man who, as lore has it, was so arrogant and selfish in his acts of thievery that he was sentenced to an eternity of torture, unable to fully live or fully die. Tough life for our young cameraman, huh?

Because the crew went against the River’s wishes, a slew of unnatural events brewed on the river, escalating into a violent storm. Of course our little mystical guru/medium/spiritual guidance, Paulina, saw all this coming through a stack of Tarot cards she seemed to pull out of her . . . . . . pocket.

The crew realized that the only way to stop the chaos on the river, and ultimately save everyone’s life, was to give the cameraman back to the river. Everyone was game for this plan, except the noble I-need-to-save-everyone-because-I-am-brilliant-doctor Lincoln. Tess agreed to throw him off “her” ship, but not until she got all the info she could on her husband. Like, for example, what the heck he was doing in the jungle.

The cameraman said that Dr. Cole was looking for magic, and not just magic, but the place where all magic gathered: The Source. This got the head of security — who is up to no good — all excited and super creepy. However, aside from that moment, he didn’t partake in any other shady business.

We’ve been hearing a lot about this Source, so it will be interesting to see where and what exactly it is. I think we’re getting closer! I have no idea what the source is, but I think it would be wonderful if it turns out to be a person. What if The Source is actually a person on the ship? Like, oh IDK, maybe Paulina! Wouldn’t that be cool?

Ultimately, the day ended well with the cameraman choosing to “give himself back” to the jungle, in a righteous attempt to save the crew. Of course, the River accepted his sacrifice and rewarded him by returning his life.

Overall, this was a fantastic episode, and the story continues to develop in positive ways. The characters are solid, with interesting arcs, but no one individual is particularly dynamic. This show is a team effort (without one character you lose the magic) and it sparkles because of the show’s unique and engaging premise. You NEVER know what the jungle is going to throw at you.

Did you watch the show? If so, what did you think?