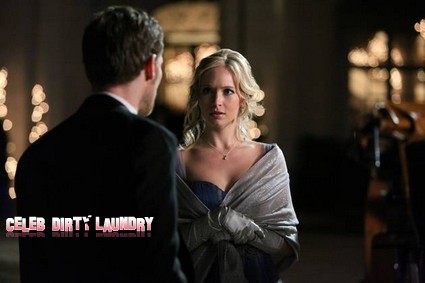 On tonight’s The Vampire Diaries The Originals held a fancy ball.  Elena received an invitation, she saw that it also contained a personal note from Esther the Original Witch who wanted to speak with her.  Did you watch the episode?  We did and we recapped it for you!  In our wrap-up we have some observations of last night’s show and some questions.

Jody: It was a boring episode – romance between Klaus and Caroline – give me a break. Elena begging Stefan for love – gag me with a spoon. Damon is the only vampire I like these days. He loves Elena and she better start reciprocating since he is enjoying rebound vampire sex with Rebekah – good choice – at least she appreciates him.

Annemarie: I disagree with Jody, I thought last night’s episode was great – it was interesting to learn more about Esther the Original Witch. She thinks her children are an abomination and I agree – for the most part they are brutal.   Esther said during the episode, ‘It’s my duty to kill them.’  Who do you agree with?

Annemarie: As for Klaus and Caroline – I love how they are pairing them – I think they are a great match.  I prefer Caroline with Klaus far more than I like her with Tyler.  Tyler is a boy and Klaus is a man!  Do you think they are a good couple?

Annemarie: The only area I agree with Jody is the Elena/Stefan romance – I guess I was not surprised when the conversation turned—as it always does—to Stefan’s lack of feeling.  At this point I really don’t care anymore – she should be with Damon.  What do you think, Damon or Stefan for Elena?

Jody: The big issue this episode is the mother from hell, literally, Esther – mama Michaelson (family name after the father) – the creator of the original vampires. Now she is back alive after a mere 1000 years in witch’s purgatory. And she wants to kill Klaus and wipe the scourge she has created off the face of the earth. To this end she has bound the family as one so if any of her kids croak then they all do. I don’t buy this at all.

Jody: I think Esther is possibly scheming to turn all her kids hybrid and that is the real reason she is tricking them into drinking doppelganger blood. Kill her own kids? Like Michael their father attempted? No way. Of course if she is legit then Klaus can still use this blood drinking to try to turn his entire family hybrid.   Maybe momma can get her husband back if she kills all the kids?

Annemarie:  Bonnie was not invited to the ball.  Considering that one of Bonnie’s ancestors—preserved Esther’s body I would think she would be curious to meet Bonnie.  I wonder why the Original Witch did not invite her?

What did you think of last night’s show?  Sound out in the comments below and let us know what you think about our questions! If you dare to see some SPOILERS and a sneak peek video of the next episode which will air next week called All My Children go HERE.