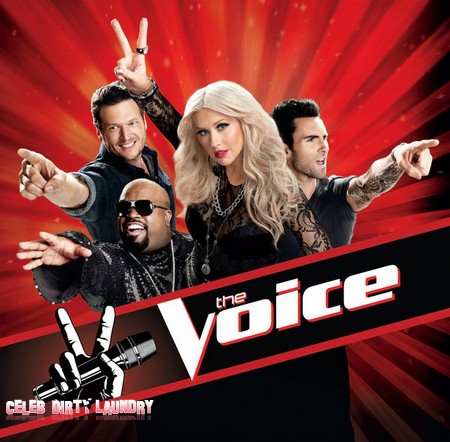 Tonight The Voice returns with Week 3 of Season 2 of the Battle Rounds. The coaches and advisors prepare their singers to battle in one-on-one elimination duets again tonight. Stand by as we live blog the show with all the up-to-the-minute details.  We had some great battles last week.  Lindsey Pavao, Jamar Rogers, Kim Yarbrough, Charlotte Sometimes, Sera Hill and Juliet Simms moved ahead and they will be in the live performances.  If you missed last week’s show you can read our official recap here!

We’ve lost some of our favorite contestants last week and tonight we are sure to lose a few more.  From the preview we see that Team Adam’s Nathan Parrett battles Pip, singing Amy Winhouse‘s song, “You Know I’m No Good.”  We also see that from Team Christina’s  Gwen Sebastian is paired against the powerhouse singer, Erin Willett as they take on Pat Benatar’s “We Belong”.

The Voice is going up against Dancing With The Stars tonight which we will also be covering here!  So who will win the ratings war?  The Voice does great with young viewers and DWTS appeals to an older audience.  My bet is The Voice will win.  What do you think?  Sound out in the comments below!

RECAP: Tonight the most exciting phase of The Voice continues, the Battle Rounds. Tonight 12 more artists will take the stage but only 6 will make it to the final rounds. The eight remaining members of team Adam are assembled, for this battle Pip and Nathan Parrett singing “You Know I’m No Good” by Amy Winehouse.

Adam brings in Pip to work with Alanis Morisette and she loves that he wants to to take it to the next level. Nathan gets to meet with Robin Thicke and Nathan is nervous he starts to have ticks. Robin is trying to instil confidence in Nathan because he has nothing to be afraid of. Their battle is fast approaching, the two head to the stage for one more rehearsal and Adam is clearly impressed with Nathan because he had a lot of room to grow.

With everything on the line, it is time for Nathan and Pip to battle. Wow, Nathan really did improve, I love his performance and I think he is beating Pip. Blake thought it was good, he loved Nathan’s big voice but he thought Pip could do everything. Christina thinks Pip has done Broadway before, he seems like he has more stage performance, but Nathan’s voice commands more attention. Cee Lo said that Nathan had an effortless cool and Pip also did a good job, but Nathan stole it. Adam thinks Nathan has been a fresh surprise, which makes this really tough on him. Pip is the winner of this battle!

Cee Lo chooses Erin Martin and The Shields Brothers battle against each other by singing “What’s Love Got To Do With It” by Tina Turner.

Cee Lo brings in Baby Face to help The Shields Brothers, he found their harmonies were off and they sounded a little like Wayne’s World. Thank goodness they finally brought it together and left out the Wayne’s World. Ne-Yo is there to help Erin but he doesn’t feel it from her and her confidence is completely shaking when he doesn’t think she is sexy.

It’s on to the battle rounds to see who will go home and who will go to the live show. Erin is destroying the song, The Shields Brothers are a welcome cool down from her annoying voice. I think when Ne-Yo said she wasn’t sexy, he meant her attitude, not her clothes, her outfit was a little over the top for the song.

Adam said it was so weird and he was a little uncomfortable with her attitude, he felt The Shields Brothers were in their garage. Blake thanks Erin for wearing his outfit and admits he would pick her. Christina loved it, she had so much fun watching them, she calls Erin a hot mama. She thought she was going with Erin, but the brothers harmonies kicked it out of the park. Cee Lo has to make his decision, he thinks it was wonderfully bizarre. Erin is the winner of this battle! (she got it for her looks and sleazy outfit)

Christina is ready for her next pairing,  Ashley De La Rose and Jonathas, she chooses “No Air” by Jordin Sparks and Chris Brown.

Jonathas meets with Lionel Richie for some mentoring, he sings a duet with Christina and get a little bit in her blue eyes. Lionel tells Jonathas to watch out that he doesn’t come out of character. Ashley is being mentored By Jewel who gives her advice no let herself shine.

Final rehearsal for Ashley and Jonathas and Christina is tough on them. Jonathas needs to stop mouthing the words while Ashley sings.

Blake’s team is the next one up and he decides to pair Alyx and Jermaine Paul singing “Get Out Of My Dream And Into My Car” by Billy Ocean. At rehearsal, both were very good.  Alyx is very young and needs more experience, both are having fun.

Alyx is teamed with Miranda Lambert as her mentor. She is not very confident, she just can’t seem to let go and relax. She will need to break her shell if she wants to win.

Jermaine gets Kelly Clarkson for a mentor. Jermaine has a really awesome sounding voice, Blake tells Jermaine not to underestimate Alyx. Whatever she decides to do on stage will definitely be well calculated. Jermaine has his work cut out for him even though he has the stage experience from being a background singer.

It’s the night of the battle Jermaine got a voicemail from his daughter and she tells him she is proud of him and wishes him good luck. The face off is ready to begin, they enter the stage. Jermaine gets the crowd to start clapping, he is really taking it all the way. Ashley is doing very well too. Good Battle! Christina loved Jermaine, he brought the energy and good effort on Ashley’s part. Cee Lo would pick Jermaine. Adam tells Jermaine that he took this song and kick it’s ass. Blake tells them both they both did the job the way he asked them to do. Jermaine was fierce and having fun. Jermaine is the winner of this battle!

Team Adam is up and he pairs Angel Taylor with Katrina Parker and they are singing “Bleeding Love” by Leona Lewis. They come into the studio to breakdown the song and decide who will do what.

Robin Thicke is called in to mentor Angel Taylor. She has good harmony but she needs to feel it more. She needs to add passion, she has to get more emotion behind her.

Katrina gets Alanis Morissette as her mentor. Katrina is doing well with her voice and harmony but she just needs to realize that she is good and be confident.

Battle night is here and both women are nervous but they are ready to bring it to the stage.

Battle night is here and these ladies are nervous but they are ready to bring it to the stage. Katrina seems to be more vocal and more emotional, she also seems to engage the crowd more. Blake thinks Katrina flat out won this battle. Christina feels this song was not good for Angel. Katrina is unreal. Cee Lo feels she had no confidence. Kathrina was consistent! Adam wants to run out of here. Adam liked Angel’s uniqueness. Katrina is the winner of this battle!

Blake’s team is next, Gwen Sebastian and Erin Willett singing “We Belong” by Pat Benatar.

The women are trying not to look at this like a battle because they both like each other, they want people to look at it more like a show.

Gwen has Miranda Lambert as her mentor and she is thrilled being a huge fan. Miranda loves how Gwen is real and very thoughtful of the person she is going to battle against. Gwen is not ready to give up her dream, she has given up having a family to sing.

Erin gets to have Kelly Clarkson as her mentor. Kelly thinks that Erin has to know how to have that “moment”, show some of the sweet stuff not just the the big stuff.

Erin meets up with Blake, she got a phone call from her mom, the nurses say her dad only has only 24 hours. She still wants to stay on the show, her father wanted her to be there and she needs to do it.

It is the final Battle Round of the night and only one is going to move on to the live show. Wow, Erin gave me goose bumps! Christina really enjoyed it, she loved the vocals and she thinks Erin won the battle. Cee Lo loved Gwen. Adam loved Gwen, then Erin came in and the richness and warmth of her voice, he picks Erin. Blake thought the two were amazing, unbelievable. Erin is the winner of this battle!

Awesome episode, I am so happy Erin won for her dad, she is one amazing singer. Night three has come to an end for the Battle Rounds.