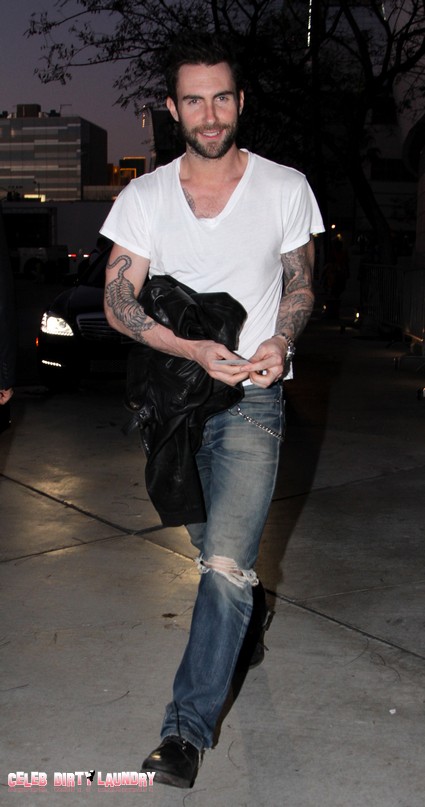 Adam Levine is a class act and he finds Simon Cowell’s desperate attempts to drum up interest in ‘The X Factor USA’ pointless and pathetic. Simon has been making noise about setting up a ‘sing-off’ that would pit the winners of ‘The Voice,’ ‘American Idol,’ and ‘The X Factor USA’ against each other. But Adam is no fool and he understands that ‘The Voice’ is already superior to ‘The X Factor’ and that his crew just needs to keep on focusing on what they do best. Adam said “We’re just kind of worrying about what we do ‘cause we all know the more we worry about everybody else, the more the quality of what you’re doing tends to suffer. So, we want to just do what we do.”

Good for Adam. Just because Simon bit off more than he could chew and promised FOX undeliverable ratings is no reason for ‘The Voice’ to get involved. ‘The X Factor USA’ is a bit of a joke – Simon fired most of his key staff after he much ballyhooed ‘bloodbath’ threat after a disappointing first season. Simon threatened to axe big stars mercilessly after his vow to get 20 million viewers per episode came up ridiculously short, drawing just 1/2 that. At least he came through on the firing promise when unceremoniously canned Paula Abdul, Nicole Scherzinger, and Steve Jones.

You can follow ‘The Voice’ and ‘American Idol’ right here on CelebDirtyLaundry.com – we offer previews, spoliers, LIVE recaps, and reviews for each episode.

Adam interviewed with Access Hollywood:  “The Voice’s” Adam Levine is taking the high road in response to Simon Cowell’s recent suggestion that there should be a sing off between the winners of the big three reality singing competitions.

“Simon’s just so clever,” Adam told Access Hollywood correspondent Jill Martin when she informed the Maroon 5 singer about Simon’s suggestion that the winner of “The Voice,” “American Idol” and the Brit’s own show, “The X Factor,” should compete against each other in a super-final.

“He’s so hell bent on competing with other shows. We’re not really interested in a way… That’s kind of a cool idea, actually, but I’m not so sure we’re totally interested in what everyone else is doing,” Adam continued. “We’re just kind of worrying about what we do ‘cause we all know the more we worry about everybody else, the more the quality of what you’re doing tends to suffer. So, we want to just do what we do.”

Now that he has a year of judging under his belt, Jill asked Adam if he had any advice for Howard Stern, who also joins the NBC fold this season, serving as the newest judge on “America’s Got Talent,” which premieres in the summer.

Howard is currently crossing the country for the “AGT” auditions and Adam said he is looking forward to the show’s premiere in a few months.

Would you want to see a sing-off between the winners of the 3 big American TV music talent quest shows?