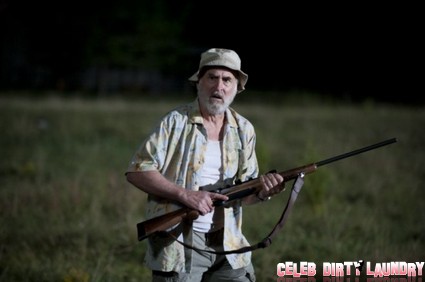 Did you watch last night’s episode of The Walking Dead? If you missed any of it, you can reach our full official recap HERE.  Last week there was huge spoiler that one of the characters was going to get killed off, although, tonight we were surprised with another a totally different character meeting his maker at the hands of a Walker, were you surprised?

What did you think of Daryl beating Randall? I thought he did right by the group, Randall is hiding a lot and they should be afraid of him.  I was upset that Dale wanted to spare Randall, what did you think, should he be spared and should he be killed? I think if they don’t kill him, he is going to eventually con them into trusting him only to have him turn on them.

Carl was told to stay away from the barn, I couldn’t believe it when he ended up on top of the loft – what does that say for Rick and Lori’s parenting skills?

Dale begs everyone that will listen to spare Randall’s life, don’t you think that Dale sometimes lives in a different world, that he doesn’t get that it is every man for himself and that they need to put the safety of the group first and foremost above everything else?

Lori tells Carl that Sophia is in a better place, he turns around and tells her there is no better place and Lori finds that he was rude. Rick tells Carl that he has to apologize and he doesn’t want to. The more Carl comes in front of the camera, the more he is looking like a spoiled brat, don’t you think?

I couldn’t believe that Carl took the gun and went in the forest, what did you think about that? When he found the Walker, I was shocked that he kept taunting him, playing cat and mouse when the Walker was stuck in the mud.

I loved how Hershel gave the watch to Glenn, didn’t you? It was such a heartfelt moment and there are so few on this show.

Rick is ready to shoot Randall when Carl walks in the barn and tells him to shoot him, did I not just say that Carl was coming across as a spoiled brat? What do you think about Carl? Don’t you think that given that they live in such violent times that his mother should have a better watch on him?

Dale is upset that Randall is going to be shot, he heads out into the forest not knowing that he wasn’t shot when he himself gets attacked by a Walker. I was shocked when the Walker ripped open his stomach, what was your reaction? It was unbelievable that the same Walker that attacked Dale was the one Carl was toying with earlier in the day, Carl should have been the one killed not Dale, what do you think?

I am really looking forward to seeing what happens next week, do you think Carl will tell the truth that he is somewhat responsible for Dale’s death?