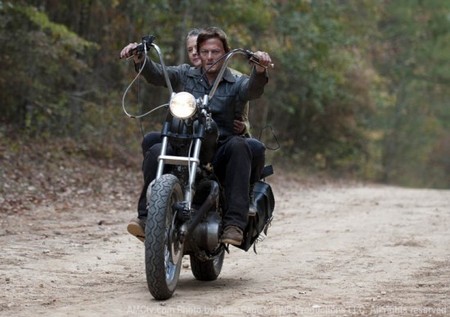 Did you see the final episode of The Walking Dead’s season 2 last night? If you missed anything, you can read our full recap HERE.  I couldn’t believe how the show opened up, it was so disgusting to see the zombies at feeding time. Did you like the opener, did you find it was the most gruesome so far?

When Daryl and Glenn explained that Randall turned into a walker but he wasn’t bit, I didn’t find that everyone was that shocked, did you? When Rick and Carl made a run for the barn the excitement went from 10 to 1000, everything was coming so fast; zombies, blood, gunshots and fire. When Hershel declared that he would die to protect the farm and Daryl said tonight was as good a night as any, I thought this was hilarious, didn’t you?

Lori finally decides to become a concerned mother tonight and notices Carl missing, although we all know that this is not the first time he has sneaked out and Lori didn’t much care all those other times. Don’t you think her concern is all a little too late?

Jimmy was driving the camper and actually saves Rick and Carl cause they jump on top of it to get away from the barn, but he forgets to lock the doors and gets eaten by walkers. Didn’t you think that was stupid, not locking the doors? I know they had to get rid of him but they could have made it heroic.

I loved when Hershel was as bold as brass tonight, didn’t you? Thankfully, he finally left with Rick otherwise he would have been a goner as well.

When the walkers took down Patricia, it was so awesome, didn’t you think it was so realistic? Although, I thought they should have taken Beth, she wanted to die recently anyway.

I was shocked when Andrea was left behind, were you? I think they could have done more to make sure that everyone that was alive went with the group, don’t you?

I was kind of surprised tonight that only two people died? What did you think about that? I don’t think it was much of a bloodbath that The Walking Dead’s boss Glen Mazzara promised, it left me a little disappointed. Don’t you think two people dead doesn’t really constitute as a bloodbath?

Andrea was freakin’ amazing in the woods, I thought she was a better bad ass than what Rick turned into, didn’t you?

When Rick ran out of gas and had his little breakdown telling Lori that he killed Shane, I was surprised by her reaction, were you? Here she was pinning Rick and Shane against each other all the time and then she’s upset when Rick kills him. I can’t stand her and I’m very disappointed that she was taken out in season 2. The good news though, rumour has it she meets her maker in season 3, I can’t wait, how about you?

I was happy that Rick finally told the group that Dr. Jenner told him that everyone has the virus that turns them into walkers, they all carry it. What did you think? Do you think he should have told them all, will they all give up hope now?

My favorite part of tonight’s episode was when Andrea was saved by the hooded stranger that has two walkers with no arms and chains around their necks attached to her. Didn’t you think that was an awesome introduction to a new character?

Rick has a virtual breakdown with the group when they set camp for the night, he dares anyone who wants to leave to go, of course there are no takers, who would possibly leave a group and head out alone? Rick says that with everyone staying, it is no longer a democracy. Do you like this new “bad ass” Rick?

What was your favorite moment of tonight’s episode? Mine was the hooded stranger with the two armless walkers chained to her. She is the first person to figure out how to survive amongst the walkers and I found it really cool, didn’t you?

In Memoriam: Jimmy or Patricia, not enough for a blood bath. Coming in season three, it’s Prison or Bust!