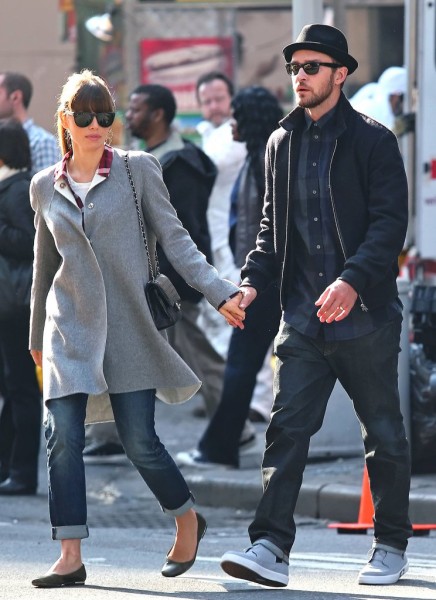 Can you imagine if Justin Timberlake and Jessica Biel announced they were pregnant the same day as the Duke and Duchess of Cambridge? Would he cry? I think there would be some tears. Justin Timberlake has to be the center of attention. He has to be the one jumping on the bride’s head. There’s just no other way to live. But sadly Jessica Biel is not pregnant (that we know of) but she’s dropping little hints that it might just be a matter of time before they’re sharing their own baby news.

While out promoting her new movie Hitchcock (although I’ve yet to see her in any of the trailers), Jessica said she’s ready to take some time off from acting. “It’s nice to have a minute. After this, the bar is so high, so what do you do? I’m taking a break,” she said.

Now snooty biotches like me could easily ask when she actually started acting but that’s neither here or there. Jessica needs a break and breaks mean babies! It seems like the right time. She’s 30. She just got married after years of playing the long suffering girlfriend and she’s best friends with Jennifer Garner. Babies. Babies. Babies.

I kinda figured that children were the only reason this couple got married when they did anyway. Justin probably could have kept stringing Biel along for years but she felt her biological clock ticking and he was magnanimous enough to throw her a bone. Because it had to be his decision, right? That couple doesn’t do anything unless Justin signs off on it. So if Jessica’s ready for babies than that really means Justin wants babies. I’m not gonna lie… I’m anxious to see Justin as a father. Will he be the cool, protective Jay-Z type or use his kids when it benefits him like Ben Affleck? My money’s on Affleck.