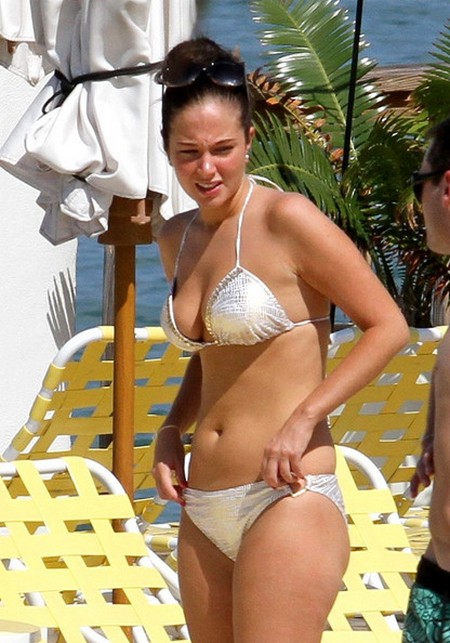 Tulisa Contostavlos is looking for more publicity taking the offensive and suing her ex-boyfriend for $160,000 for allegedly leaking a sex tape of the couple onto the internet.  Many people believe that Tulisa herself released the sex tape to promote her upcoming single release.  The ‘X Factor UK’ judge was devastated when footage of her engaged in oral sex with Justin Edwards appeared online.

Tulisa claims that Justin was the person responsible for the release but he denies this.  But now a lawyer for Tulisa has issued legal papers against Justin – also known as MC Ultra – to prevent him talking about the video.

A source told The Sun:  “He feels he can’t talk publicly now because of this.  She’s suing for up to $160,000. This latest move by Tulisa has really unnerved and unsettled him. It’s serious stuff and he’s got to take it seriously. It’s a lot of pressure for him.  This is an unusual case, in that the injunction was granted after the material became public, not before. It entitles Tulisa to seek damages.”

Tulisa – who got a High Court injunction last week to ban the video after it was leaked – wants damages for breach of confidence and privacy after the video of her performing a sex act went up for sale on the internet.

An application to extend Tulisa’s emergency injunction will be heard at the High Court in London tomorrow.

After the tape was leaked, Tulisa posted a YouTube video admitting she was “devastated” and blamed Justin.

Tulisa said:   “As you can imagine, I’m devastated, heartbroken and I’ve been in bits for the past few days. When you share an intimate moment with someone that you love, that you care about and you trust, you never imagine for one minute that that the footage may at one point be shared with the rest of the UK or even people around the world, so as you can imagine, it’s a pretty tough time for me.”

However, he hit back on twitter saying:  “To find the truth both sides of the story should be heard b4 passing judgement #thatisall.  I believe in silence being a sign of Integrity but in this case I guess I’ll have to speak up and Lay out the facts and let you guys decide.”

Is Tulisa making too much of this?  What do you think?  Let us know in the comments below.