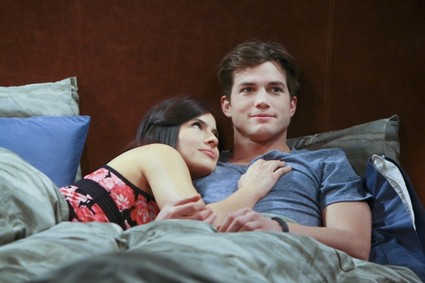 CBS’s Two & A Half Men is back tonight at 9PM with an all new episode called ‘The Duchess of Dull-In-Sack.’   Stay tuned as we live blog the show with all the up-to-the-minute details.

On tonight’s episode Walden is in a love life crisis when he is worried that he and Zoey’s time in the sack might be getting a little boring when Zoe tells him after sex, “that was nice, now let’s do something fun.”  Walden confides in Alan – Zoey’s appearing bored in the sack makes him question his performance, or does it?   Walden decides to use some of Berta’s famous “enhanced” brownies to get Zoe to relax.

‘The Duchess of Dull-In-Sack’ airs at 9PM and we will be live blogging the show with all the up-to-the-minutes details, so come by and spend the evening with us.  Make sure to refresh often to get the most current updates!  While you wait for the episode you can read some spoilers and see a sneak peek video here!

RECAP: Zoe’s little girl wakes up with a bad dream and goes into her mommy’s room – Walden makes himself scarce under the bed, not wanting Zoe’s daughter to see him there and when Zoe tells her they are going to make pancakes, she jumps up and down on the bed.

Alan and Jake are having breakfast and Walden comes in limping, he tells them he fell on his penis. Jake makes himself scarce and Walden confides in Alan that things are not going great with him and Zoe because the sex is not that great, she can take it or leave it. Alan asks Walden if he talked to Zoe about the problem and he says no, Alan suggests that he does. Later in the day, Walden makes a date later that evening with Zoe, she tells him that her daughter will be away for the night. Walden tells Zoe that she appears not to be enjoying the sex, Berta is eaves dropping on them. Walden suggests they try something like role playing. Zoe tells Walden that she is satisfied with their carnal interludes, she is actually fine and dandy with it.

Berta tells Walden that he should be dating a nice Polish girl, sex is the only thing they never had to stand in line for. Berta offers one of her special brownies to Walden to loosen up Zoe.

Walden and Zoe are in bed, they just finish watching a movie with Hugh Grant. Zoe is a little puzzled that Walden is not being ‘frisky’, they both get into a little more talking than anything else. Walden decides to offer Zoe a brownie, they take an adverse reaction on her, she runs out of the room thinking someone is coming after her.

Walden is searching everywhere for Zoe, he stops by Jake and his friend who are both stoned and lounging on the deck.

Alan arrives home and finds Zoe in the kitchen having a little snack, or rather a huge snack – the brownies have made her ravenous. Zoe opens up to Alan that once she trusts a man, she has one orgasm after another especially when she gets her bottom spanked like a vesta.

Walden is back, Alan tells him that Zoe is in the bedroom waiting for him and Alan sees the food on the table, takes a u-turn back to the table. The next morning, Walden drops of Zoe and finds her ex-husband, Nigel, at the door. Her daughter comes to the door and tells Zoe that daddy can’t take her to the zoo, Zoe reassures her that she will take her. Walden feels awkward about the whole situation and asks Zoe’s daughter if they both can go get a glass of water; the two bond together while Zoe is at the door with her ex. Zoe’s daughter likes Walden so much, she invites him to the zoo with them.

They are back home from the zoo visit and Zoe puts her daughter to bed. Walden is set to go home and Zoe takes him by the hand, leads him into her bedroom and tells him that she is going to bang him like a snare drum. Walden finally got what he wanted and it didn’t take Berta’s brownies.

Walden returns home to find Jake and his friend still stoned, they’ve been in Berta’s brownies again and the two are still looking for Zoe.

That’s a wrap for tonight!