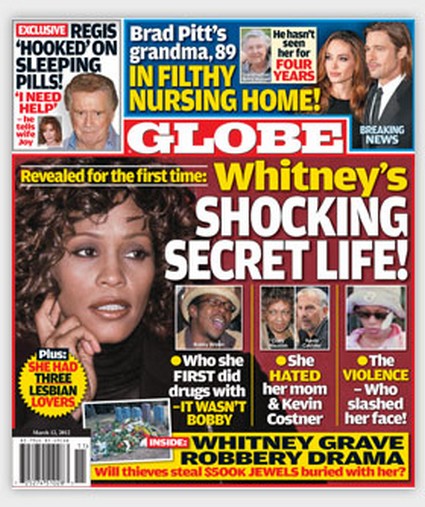 The March 12 Issue of Globe Magazine features Whitney Houston’s stunning secrets exposed including her 3 lesbian affairs which were kept quiet until now. According to the Globe Whitney engaged in 3 torrid lesbian love affairs but they do not yet reveal with whom. Could this be true? Whitney always seemed partial to men but we will find out when the Globe’s print edition comes out on Friday. The Globe is not going to let Whitney rest in peace as they take full advantage of her tragic death to sell more magazines – the irony here is that one of the deadly secrets they claim to reveal relates to fears that grave robbers are after the $500,000 worth of jewellery and designer clothes buried with the star. Of course it is Globe Mag who are behaving like grave robbers… .

What other awful secrets are revealed? Well there are the predictable insinuations about how Whitney really felt about Kevin Costner who starred with her in ‘The Bodyguard.’ Did Whitney have a crush on Kevin? Again the details will be revealed in the print edition which we will of course report on Friday.

The ugliest revelation that Globe Mag claims to expose is that Whitney hated her mom, Emily “Cissy” Houston. Well of all the secrets that Globe claims to know, this one seems entirely plausible. Obviously Whitney was an extremely troubled and unhappy soul – and that usually implies a difficult relationship with one or both parents. In fact there are credible sources that claim Whitney’s death in the bathtub on February 12 was a suicide. Whitney’s dad, John Russell Houston, Jr., dies in 2003 and so it’s hard to nail him for much now.

Globe claims:  In a bombshell exclusive, GLOBE reveals for the first time the stunning secrets Whitney Houston took to her grave – including her hatred for her mom and how she really felt about her Bodyguard co-star Kevin Costner. Also, read about fears that grave robbers will dig up her body to steal the $500,000 in jewels buried with her – all in the new GLOBE.

Leave Whitney alone. Her life obviously gave her little happiness since she was always trying to drug and drink herself into oblivion. Now the vultures are crowding around to pick her dead and sad bones. And we are reporting it – and you are reading it.