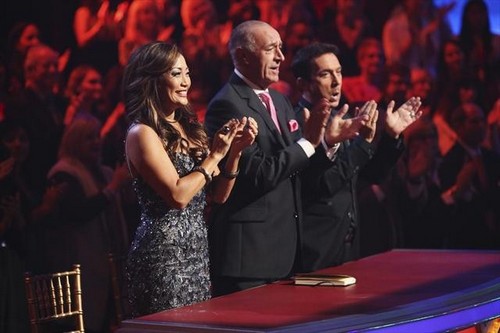 It’s all over tonight, season 15 of Dancing with The Stars All-Stars will hand out their Mirror Ball Trophy and the glitz, glitter and dancing shoes will be shelved for another season. Last night the three remaining couples,  Kelly Monaco & Valentin Chmerkovskiy, Melissa Rycroft & Tony Dovolani and Shawn Johnson & Derek Hough proved they deserved to be in the finals.

The three couples performed their favorite routine from the season, as well as a Super-Sized Freestyle. For their Freestyle, they’ll be allowed to add extra performers, incorporating all kinds of lifts and tricks to create an out-of-this-world entertaining routine.

After last night’s performances Melissa Rycroft is at the top of the leaderboard with a 60/60 and Shawn Johnson is at the bottom with a 57/60.  We conducted a poll today and our readers are giving the win to Shawn Johnson with 47% of the vote.  However, Melissa is a close second with 43% of the vote.   If you have not voted their is still time, go HERE.  Who do you think will be the ultimate dancing survivor? Cast your vote in our poll below, and let us know America!

On the final tonight, the excitement will continue with all of this season’s eliminated couples returning to the ballroom, performing memorable routines of the season. And in the final element of the competition on Tuesday, the three finalists perform an Instant Dance routine. They’ll be given their music and dance style just minutes before they must perform live to complete the judges’ scores. By night’s end, one couple will be crowned champions of this all-star season.

Tonight’s Recap:  The judges pick a dance a dance from last night for the encore.  It is Shawn Johnson and Derek Hough‘s freestyle with the Fab Five.

Below is the opening number of tonight’s show.

The couples will be completing in an Instant Dance tonight and they are now picking the dance style they will be performing. Kelly and Val pick – Cat & Mouse Jive, Melissa and Tony pick – Life is A Highway Samba, Shawn and Derek pick – Respect Cha Cha.

Several of this season’s couples came back for an encored.

First up for their instant dance:

Judges’ Comments: Len: “You have been a revelation for this whole season. you are clean, crisp and you came out and really went for it, well done!” Bruno: “You have the energy of two randy rabbits. There was something going on there. The Jive is difficult to do; sometimes you lost a bit of balance. But Magnificent! Carrie Ann: “I am so impressed this was an instant dance. You two were fantastic, in sync. You have won my heart and the audiences!”

Judges’ Comments: Bruno: “You turn into a South American Siren, slinky with a touch of rock and roll. The music was not as Latin as it should have but you compensated.” Carrie Ann: “Throughout the season you showed us nothing but grace but your rushed the dance a bit. But you guys have been stellar”. Len: “The thing was the interpretation was not quite like it was last night. But having said that you have been my greatest joy to watch.”

Judges’ Comments: Carrie Ann: “That was so amazing! Shawn I think you started out as a star and that was a star studded performance, perfection.” Len: “You are the no stress express, Derek has thrown fantastic choreography and that was fantastic. “Bruno: “One thing is for sure you are going out with a bang, a grand finale, perfection!”

Time to find out who wins!!!