BY Cate Meighan on September 18, 2012 | Comments: Leave Comments
Related : Reality TV, Recap, So You Think You Can Dance, Television 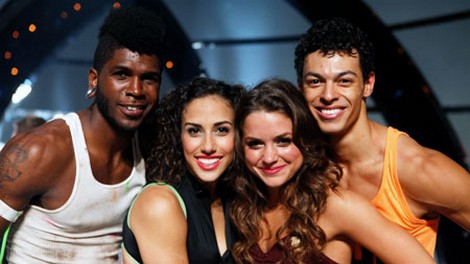 Are you guys ready because here we go! After a summer-long competition tonight we will finally learn two very important things, just who is America’s favorite guy and girl dancers!  Eliana Girard, Tiffany Maher, Cyrus Spencer and Chehon Wespi-Tschopp are the final four standing and each has had a spectacular run in very unique ways.  Did you see last weeks episode?  We did and we recapped it here for you!

Eliana has been touted as possibly the best dancer EVER on the show (or at least that’s Nigel’s opinion) and about halfway through the performance shows she really did seem to become pretty invincible. The girl can do most anything and she makes it look easy.

Tiffany is the pint sized girl-next-door that you want to root for. She attacks every performance and gives far more than her jazz roots should allow her to. She has never sat in the bottom three which means the audience likes her. I mean, they really like her.

Chehon seems to have hit his stride very late in the competition. Even I didn’t fully appreciate him until very recently. All of a sudden I realized he is indeed my favorite. The strongest partner with jump and leaps that are so smooth it’s incredible. I love watching him in the air as much as I do on the floor.

Cyrus is just plain crazy. He has brought a new style to the show called animating and he is beyond incredible at what he does. Perhaps more incredible is his ability to hold his own in every other genre of dance despite NO formal training at all! Cyrus also has never sat in the bottom three.

Also tonight we’ll be treated to the rest of the contestants and all stars returning to perform favorite routines from season nine.

Who will win is truly anybody’s guess so tune in to Fox tonight at 8 to see the action unfold for yourself! While you wait for our recap hit the comments and let us know what you thing of SYTYCD Season 9, so far!

Tonight’s recap: This is it, the finale of season nine. The top 20 dancers all have returned to grace the stage together and it’s sure to be a great show. Tonight we have six judges front and center- Lil C, Adam Shankman, Debi Allen. Tyce DiOrio, Mary Murphy and Nigel Lythgoe.  They won’t exercise any control over the results but they do get to comment on what unfolds onstage.

We’re starting with a group number choreographed by Sonya Tayeh and Christopher Scott that is just phenom. Set to Torn by Nathan Lautier, I’m honestly not sure exactly what the hell I was watching but I NEED to YouTube it, like, now. It was like a mix of hip hop and contemporary with the girls almost in Paso dresses. I know I missed a ton because there was so much happening here at once but it looked so cool.

The first couple of the night is a retread of a Travis Wall piece. It’s Audrey and Matthew’s “Titanic’ piece that earned critical acclaim the very first night of the competition.  Lil C gets to choose a routine that he wants to see again next and so of course he wants to see Witney and Twitch do their East Coast hip hop piece to Lil Wayne. Witney’s moves have gotten dirtier and her hairography is bigger than before.

Debi Allen gets a chance to pick the dance that moved her the most this season and she chooses Tiffany and George to do Turn the Page, a piece put together by Sonya Tayeh. It’s much better danced and far more memorable the second time around.

Adam Shankman will always be my favorite judge and he wants to see Cole and Lindsay’s Paso because Lindsay is fab and Cole is SYTYCD’s first super hero. This dance can’t possibly ever get old. The judges call it the best Paso ever on the show and it truly is. This dance alone could get Lindsay a spot over on Dancing With The Stars.

Tyce DiOrio had to choose a piece by Amelia and Will, their NappyTabs number to Love Cats, to be exact. It’s fun and kicky, kinda like Tyce. I’ll always love Amelia and Will together. Not my favorite by them, but so happy to see them together again.

Mary Murphy gets to pick her piece next and she chooses the brilliance of the man next to her- Tyce DiOrio. Chehon and Kathryn step onto the stage to perform Eli, Eli which is a holocaust tribute number. I love Chehon and I think this was the piece that made me realize it. I want to see him win this.

The four finalists get to choose a routine that they really want to dance to again. Eliana  (of course) chooses the Bang Bang number with Alex Wong. She rightfully felt that this was a turning point for her, finally being paired with another ballet dancer enabled her to prove what she could actually do.

Cat Deeley even gets to pick her favorite dance of the season so she takes the party route and wanted to see the 11 lifts packed into the disco routine by Tiffany and Brandon.

Chehon gets to choose his favorite routine of the season and he believes his Tango with Anya was a breakthrough performance for him emotionally.  It’s quiet and subtle but really shows his ability to connect with his partner.

We got extra lucky tonight because instead of just cranking out an old hip hop routine, Christopher Scott choreographed a brand new one for Cyrus, Comfort and Twitch. He also threw himself into the mix! It’s an animator’s dream. Basically Cyrus cheated at an old style card game and tried to leave with a card in his pocket. Christopher eventually picks the card out when he’s not looking. I really hope Christopher is back next year.

Tiffany chooses a contemporary piece to the Power of Love, danced with Adee as her defining moment in the show.

Back during the audition phase there was an animating crew called Dragon House that we all just loved. They play off each other and the result is way cool. In the season of animating its not a surprise to see SYTYCD bring these guys to the finale stage. Clad in suitcoats, crisp shirts and skinny jeans their tics and moves really pop beneath the dark lights. I want to see more of them!

You knew Cyrus would Twitch his dance with Twitch as his personal favorite right? Me too. It’s (as Nigel says) a season stealing routine.

NappyTabs manage to construct a brand new group number that properly shuts down this show with a bang. It’s a Lion King Remix in full costume, featuring the top 20 and all of the all-stars as well. Really cool and there is a bit of every genre thrown in there.

Here we go. Both Eliana and Tiffany are called to the stage and we see a video of them throughout the season. Cat braces them and announces that Eliana has won the girls crown.  I preferred Tiffany but really, Eliana is completely worthy.

Time for the Cyrus and Chehon package. They both want and deserve to win but who will it be? Cat tells them based on last week’s votes, America’s favorite male dancer is Chehon. That result thrills me! Love him!

Check out fox.com because these kids are going to be heading out on tour soon! Catch them in a city near you if you can!