BY Robyn Good on September 11, 2012 | Comments: 2 comments
Related : Reality TV, Recap, So You Think You Can Dance, Television 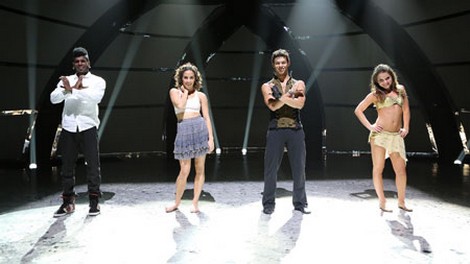 Are you ready So You Think You Can Dance fans, because this week is IT!  Tonight at 8pm on Fox the final four contestants will take to the stage for the last time in competition.  Joining the regular judging panel as guest judge this week is “Chicago” director Rob Marshall.  Did you miss last week’s episode?  If you did we have the full and detailed recap here for you!

Eliana Girard, Tiffany Maher, Cyrus Spencer and Chehon Wespi-Tschopp will be paired with new All-Star partners tonight. Because there was no voting after last week’s show, there will be no eliminations tonight. Instead we will all get a good look at the final four performers. Have you zeroed in on a favorite or two yet?  Remember this year we will crown co-winners, one guy and one girl will share the title of America’s Favorite Dancer.

I have to admit I’m completely undecided and a lot for me will depend on what happens onstage tonight. Eliana and Tiffany are equally good and both seem to adapt to whatever style they pull from the hat. As for the guys, I love Chehon’s intensity and contemporary style but I have to give Cyrus a dump truck load of credit. No one without formal training has ever made it as far as he has! He adapts and does well in every style. He may not be perfect, but he entertains no matter what.

On tonight’s show America’s favorite four dancers perform for the nation one last time to determine who the fans will choose as their favorite guy and girl, in this summer’s hottest dancing competition. Be sure to tune in to watch your favorites in their season finale performances.

So You Think You Can Dance Top Four Perform – LIVE RECAP HERE!

After 16 weeks it’s finally time for the performance finale. Next week two winners will be crowned and they will split $200,000 and a Dance Spirit cover.  Rob Marshall joins the judging panel tonight and we are off and running quickly.

Eliana and Cyrus are up first attempting a Paso doable to a Daft Punk song. I’m kind of shocked how well this worked. He was actually the cape and as usual, Cyrus stepped up did the genre justice in spite of no real training. Eliana is as strong and versatile as ever. Nigel Lythgoe congratulates them both for totally earning their spots in the finale. Mary Murphy tells Cyrus that he totally delivered and Eliana is on fire. Rob thinks they’re simply gorgeous.

Tiffany joins all-star Will for a contemporary piece by Sonja Tayed that is typical, in that it’s smokin’ hot and off beat. It was just fabulous, the lifts were solid and she proves to be a great partner. Mary thinks they are a perfect pairing. Rob thinks Tiffany is beautiful and fearless while Nigel comments on how long her lines are. He feels bad for calling her the girl next door was under selling her.

Chehon and Eliana draw a classical ballet routine that kicks their butts in practice. The biggest problem for them is that while on the show they haven’t taken all the classes that ballet requires. You certainly wouldn’t know it from their performance to The Nutcracker though as it got a complete standing ovation. Rob can’t believe Chehon’s versatility and he thinks Eliana is breathtaking. Nigel is thrilled to have two formally trained ballet dancers in the finale and he was blown away by what this duo is capable of.

Tiffany and Cyrus are paired up for a lyrical hip hop number that casts her as his broken hearted girlfriend. Of course this is Cyrus’ strong point and Tiffany really kept up well. She was believable as the angry broken girlfriend. Nigel thought they were incredible and Mary says they killed it.  Rob says they dance with abandon which is his very favorite quality in a dancer.

Finally, a group routine and it’s choreographed by Tyce Diorio. It’s set to a classical song but with a synth beat and it caters to each of their styles. There’s some contemporary, ballet and hip hop thrown in. Not my favorite group number but an interesting concept.

Chehon is lucky enough to be partnered by all-star Alison for a Stacey Tookey piece. It’s about Chehon allowing Alison to go off and pursue her dreams and the song is called, appropriately enough, Leave. Alison is one of my all time favorite dancers and this reminds me of why. She and Chehon could be my favorite dance pairing almost ever. Mary says this piece will be Emmy nominated and I’d have to agree while waiting for my goose bumps to go away. The height on his leaps is unreal and his super hero  strength in the lifts is incredible. Nigel says Alison brought him to life because they are on the same page. Mary could do nothing but scream and Rob was astounded.

Eliana and Tiffany team up for a Ray Leiper Broadway routine but with a great prop- a stripper pole. The two swing and dance to a tune from the Chicago soundtrack and it was sassy and magnificent. Nigel doesn’t know what to say that won’t get him into trouble. Mary was mesmerized and Rob was melting into his seat.

Cyrus and Chehon  get to work together with Sonya Tayed and she’s crafted a routine about their struggle to make it to the finals. This was so strong and she showed them both off equally in the weird synth piece. Nigel is proud to know Cyrus and he says Chehon is his favorite dancer. I agree with him Chehon has so much control that he just floats through every performance. Mary is proud of both of them and Rob comments on how they helped and literally lifted each other up through the whole routine.

Eliana and all-star Alex are paired up for a Travis Wall contemporary piece to the old song Without You. I usually love Travis’ stuff but this time I was kind of bored. . Rob thought it was like poetry.

Tiffany and Chehon are learning how to rhumba with Dimitri Chaplain choreographing a gentle version of Love Me Tender. The emotion wasn’t quite believable but the movement was near perfect. Mary thought they were great and Rob thought there might be a real connection there. “It was sexy.”

Perhaps the one pairing that we’ve all wished for this season is about to come to life- Cyrus and all-star Twitch doing an animating routine!  Christopher Scott is choreographing which will make it even better. He says that their characters have supernatural powers. Let me tell ya, they sure do have super powers and the audience- all on their feet completely agree. Rob says they’re crazy and it was beyond exciting.  The whole panel is in agreement that this routine simply stole the show and it was the perfect ending to the season nine performances.

Tune in next week to see who will be America’s choices for the top two dancers in the country!