BY Robyn Good on September 5, 2012 | Comments: 3 comments
Related : Reality TV, Recap, So You Think You Can Dance, Television 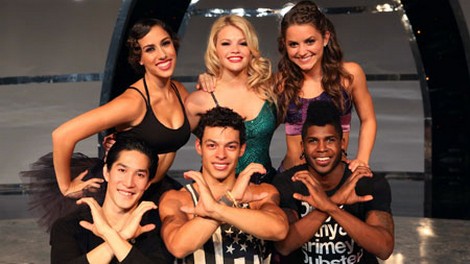 Season 9 of So You think You Can Dance is winding down so quickly!  Can you believe that next week is already the finale?  Last week we all said goodbye to two amazing dancers, ballroom vixen Lindsay Arnold and contemporary sweetheart Will Thomas.  Did you miss last week’s episode if you did you can read our full and detailed recap here!

Tonight the top six remaining dancers will again set the stage on fire, dancing beside all stars (i.e.; former SYTYCD alumni) with the hope of securing a spot in the finale. Remaining in the competition are:  Witney Carson, Eliana Girard, Cole Horibe, Tiffany Maher, Cyrus Spencer and Chehon Wespi-Tschopp.  In other words, the deck is stacked heavily in favor of two contemporary dancers walking away crowded as America’s Favorite Dancers.

I say that with a bit of hesitation thought because Witney is a ballroom fire cracker that has proven she is up to whatever task the choreographers put in front of her.  Personally my bet is on her for the female winner.  As for the guys it’s truly anyone’s guess who will take the prize. Cyrus is in a class by himself but the others have the years of training that he lacks. It’ll be interesting to see who manages to shine tonight.

At the end of the show two more dancers will be sent home and the remaining four will have secured themselves a spot in the finale next week. After tonight, the Top 4 will go on to compete next week and two of that four — one guy and one girl — will be crowned So You Think You Can Dance 2012 champions on Tuesday, Sept. 18.

Tonight’s episode: Tonight’s show opened with a contemporary freak show reminiscent of “Ramalama Bang Bang” from season two. In other words, it was awesome. Black frou frou tutu’s, face masks for the guys and killer choreography done by Sonja Tajhed, of course. You can always tell if it’s a piece by Sonja because it’s a bit off beat, like this. The top six danced it brilliantly and if it’s any indication of what’s to come, the show will be fabulous. The judging panel is introduced and beside Mary Murphy and Nigel Lythgoe is one of my favorite guest judges, Christina Applegate.

Tiffany gets to join the King of Swing tonight, all-star, Benji Schwimmer, for a jive. Oh my hell this girl actually manages to keep up with him while bopping along to “What I Like About You”. The energy was ridiculous and her flick kicks really did match his. Great, great job here.

Cole is dancing with all-star and reigning SYTYCD champion Melanie Moore and embracing a Sonja Tayhed jazz number and she is aiming to show a softer side to Cole. “Too Close” is about a guy needing more freedom in his relationship and this piece is different and really showed the struggle. Mary loves how Melanie was lifting Cole and how he carried the number. Christina thinks Cole is powerful and masterful in every number that he is given. She predicts he’ll make it to the finale. Nigel loves how Sonja breaks the gender rules in her choreography and he loved seeing Cole’s vulnerability.

Eliana and all-star Twitch take on a Christopher Scott hip hop routine. Eliana is a girl that wants to give the postman a special letter. This is a supped up version of The Marvelettes “Mr. Postman” and they kill it. Christina points out that Eliana can do anything. Will Jay Z hire her, no but who cares. Nigel thought this piece relied too much on character and not enough on the dancing. Mary was entertained and being entertained is the whole point of this competition.

Chehon is paired with all-star Katherine for a Tyce Diorio contemporary piece about loss. They are a couple whose whole life now exists in one suitcase. Nigel is blown away by Tyce’s ability to get the correct emotion out of both of these dancers. Mary thinks it’s by far one of the most amazing numbers of the season. She comments on how Chehon is still oozing with emotion because of his own movement. Mary calls it an honor to see this live. Christina calls Chehon a technical master but is thrilled to see him master the emotional side.

Witney joins all-star Marco have a contemporary jazz piece that I think is weak compared to everything else we’ve seen tonight. Witney is a bride with jitters that ultimately leaves her would-be groom. Mary loves Witney and Christina calls her a “dancer dancer and not just a ballroom dancer”. Nigel loved it and wished Witney stayed married in the piece so that next week Tyce Diorio could choreograph the divorce!

Cyrus being paired with all-star Comfort is a no brainer. Throw into the mix Christopher Scott choreographing a dub step routine for the duo and the result should be crazy. And it was. Like standing ovation, Cyrus is crying kind of crazy. Christina can’t get a word in because the audience is still screaming. Finally she says that this routine was totally carved out for Cyrus. Nigel thinks it was remarkable and Christopher is a genius to put something like this together. Mary is speechless but states the obvious- everyone loved it!

Everyone gets to perform again tonight as the final six are going to now be paired up for a final dance. Up first, Witney and Chehon will Chacha. Witney is thrilled to be dancing in her genre this week and Chehon is simply hoping not to disappear. She is such a fire cracker and Chehon still struggles with the fast latin rhythms. Mary is near tears telling Chehon it wasn’t good enough and that his lacking technique prevented her from shining. Christina won’t shred them, period. Nigel mentions how their lift fell apart and how her being in the air so much took away from her incredible hip action.

Cole and Eliana have the honor of working with Mia Michaels on a contemporary piece about hatred. She took the movement of rams and attached it to this couple and it was chilling. It captured everyone and Nigel called it mesmerizing. Mary was taken by the gentle power and strength that Mia brought out of these two. Christina mentions how Eliana finishes every move and creates pictures with each move.

Up last is Cyrus and Tiffany tackled a Broadway piece and Cyrus never ceases to amaze. Tiffany is so well trained and Cyrus keeps up. Nigel loves them both so much as does Christina.

All six dancers are called to the stage and the two girls in next week’s performance finale are Tiffany and Eliana. Witney is sucking it up and smiling through the multitude of tears that are about to fall once the camera is off of her.

The guys are up next and both Chehon and Cyrus are in next week’s performance finale. I’m not thrilled to see Cole and Witney go but the fact is all of these dancers are absolutely amazing and no one really deserves to go, they just kind of have to.  Tune in next Wednesday at 8 to see who will win as season end wraps up!