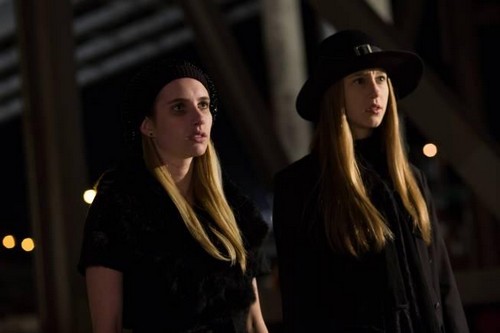 Our favorite creepy drama AMERICAN HORROR STORY continues tonight with another new episode called “The Sacred Taking.” On tonight’s show, rivalry comes to a head. Did you watch last week’s episode? We did, and we recapped it right here for you!

On last week’s show, Fiona found new purpose in a dangerous love affair. A night out with LaLaurie led Queenie to question her place in the Coven. Cordelia made a fateful decision about her mother.

On tonight’s show, Cordelia rallies the girls in the fight to stop Fiona; a dangerous new enemy puts Misty in the cross hairs; the rivalry between Marie Laveau and Delphine comes to a head.  Queenie might be dropping her old friends.

Tonight’s episode is going to be another spooky one, and you won’t want to miss it. So be sure to tune in for our live coverage of FX’s American Horror Story – tonight at 10PM EST! While you wait for our recap, hit the comments and let us know if you are excited about the season 3 episode 8 of American Horror Story. While you wait for the recap, check out a sneak peek of tonight’s episode below!

The show opens with Queenie walking down a set of stairs. She arrives in a rough place under an overpass and is attacked by a homeless man. Zoe and Madison try to come rescue Queenie from Marie’s hold on her; Queenie proceedes to kill the homeless man, slices him open, and retrieves his beating heart. Queenie says that Marie will be making her a potion to give her more powers. She says this town isn’t big enough for both witchcraft and voodoo. A war is coming. Queenie says, “You’re going to lose.”

Fiona tells us about the cancer she’s battling. She’s writhing on the floor in pain — and she can’t bear the thought of dying. She has a flashback to the moment she told Cordelia that she’s dying, but Cordelia, mad at Fiona for the thing’s she’s done, doesn’t care. She wants her to die. Fiona says that her cancer is moving through her body so fast, faster than normal, because one of the girls is coming into her Supreme power. And she needs to stop her before it’s too late.

Meanwhile, Luke is being chastised by his mother for involving himself with the girls next door. His mother thinks they “work for Satan,” and that they’ve tainted Luke. She prepares an enema kit with drain cleaner (or some form of harsh chemical) and instructs him to get in the bath and “cleanse himself.”

At the mansion, Cordelia sits down with the girls. Nan can hear Luke’s painful thoughts — but Cordelia instructs her, and the girls, to forget everything that’s happening outside this room.

She says losing Queenie was a terrible failure, her failure, but that now she’s dead to them all. Someone’s knocking on the door furiously. It’s Misty. Misty says that someone’s coming for her. In her flashback, we see that Myrtle Snow has been successfully revived, and she tells Misty that there’s a man in the swamp with a shotgun. Misty and her runaway just in time. At the mansion, Cordelia welcomes her to the coven. And I just had this thought . . . . WHAT IF MISTY IS THE NEXT SUPREME????

Misty asks if her friend can stay also. She then takes them into the greenhouse. Myrtle is back. Cordelia confesses that the coven has fallen under horrible, dark times — the worst of times. Myrtle says, “Or, perhaps, it’s the best of times. Resurrection is one of the hardest and most difficult of the Seven Wonders to perform, and several of us here have been brought back by the hand of one witch . . . . Misty Day.” Myrtle points to Misty, who’s crouched humbly in the back of the greenhouse watering plants, and says, “Behold our next Supreme!”

Zoe speaks with Kyle. Kyle wants to makeout, but Zoe says they all have business to settle downstairs.

Myrtle, Cordelia, and the girls prepare the ritual, which is called the Sacred Taking, which prepares for the ascension of the new Supreme. They don red robes. Cordelia says becoming the next Supreme is no light responsibility — that countless before them have “bowed” beneath the wait, all except Fiona, who simply ran from the responsibility. Misty wants to say a few words before they begin the ritual: “I don’t want to be the Supreme.”

But Cordelia says, “It doesn’t matter what anybody wants. Once Fiona is dead, whoever the Supreme is . . . WILL BE.” As they circle together for the ritual, Cordelia tells of the history of the sacred ritual, which is considered the most hallowed sacrifice a Supreme can make for her coven — to ensure it’s longevity. But Madison says, “You really expect that narcissistic bitch to sacrifice herself?” Cordelia says, “Not without a push.”

Next, Fiona comes out of the bathroom in her room only to see Madison dancing in a red dress. Fiona, of course, believes she’s seeing something. But then she asks, WHAT ARE YOU, and asks WHO BROUGHT YOU BACK? Madison, of course acting, says, “I’m the Supreme. I brought myself back.”

Madison says that everyone knows she was killed by her and that she has one of two choices: She can either burn at the stake tomorrow or swallow some pills and die by her own hand. Madison leaves and in walks Myrtle. “Is everyone coming back from the dead?”

Myrtle reveals that she was brought back by the new Supreme, Madison. Fiona says that she’s not ready to die and says that she’ll be leaving for an exotic island. She says she’s finally found someone to whom she belongs to — and it’s not fair. Myrtle tries to tell Fiona that she’ll die alone and that this new love of hers will leave her, just like everyone else has left her over the course of her life.

Madison walks down the staircase to find all the ladies waiting for her. They ask how it goes. Madison says good, that Fiona thinks she’s the next Supreme. Nan is saddened by the fact that nobody thinks she could be the next Supreme and runs out of the mansion.

Nan runs over to Luke’s house. She opens the door with magic and walks into his house. She whispers his name. She finds him tied up in a closet.

Myrtle walks into find Fiona doing her makeup. Myrtle says, “You’re preparing the corpse.” Fiona says, “Be a dear. Come hold this mirror. My hands shake so from the meds.” Fiona says that some people play it safe on the merry go round and some people live for the thrills on the roller coaster. Fiona seems to be preparing to die willingly. She asks Myrtle to watch over Cordelia, her biggest failure. Fiona goes onto the bed and swallows the pills.

Fiona wakes up. She sees Spalding.

Spalding hands Fiona something to help her purge the drugs from her body. Fiona says, however, that she’s finally trying to do something right for once. But Spalding says that he won’t allow her to become a martyr. Spalding says that everyone lied to her. Fiona throws everything up and, surprise, surprise, swears to exact a vengeance on the ones who led her on.

At Marie’s, Queenie seems to be feeling guilty for betraying Delphine. She hands her a hamburger. Marie walks in and tells Queenie “not to feed the animals.” Queenie gets sent away. Delphine gets mouthy with Marie. She laughs and says, “What are you going to do, kill me? Remember, I can’t die!”

Marie walks over to her cupboard and pulls out a knife. She walks over and chops off Delphine’s hand.

Nan rescues Luke and they decide to run away together. Nan says, “Like boyfriend/girlfriend?” and he nods. His mother comes between them and says that he can’t leave. Luke pushes her. But then there’s a rifle laser on her chest. And someone shoots her.

There are more shots fired, aimed at Nan, but Luke pushes her out of the way and gets shot.

Meanwhile, Myrtle plays a sad song on the piano. They all wait for Misty to come into her powers. But Fiona walks downstairs and asks to meet the “swamp witch” everyone’s talking about.

Meanwhile, Zoe leads Cordelia over to the house. Cordelia has a powerful vision and bends down to find a bullet casing. She touches and sees that this was no run-of-the-mill robbery. They were after them. It was obviously Hank hunting witches.

Zoe returns to see Kyle. She hugs him. She tells him that they’re under attack. She says they have to go. But he shouts, “No. This road goes two ways. I love you.” Madison is listening on, and she’s visibly upset by Kyle’s profession of love for Zoe.

The next morning, Fiona wakes up to see Cordelia sitting at the table. Cordelia says that she’s not going to apologize for attempting to orchestrate her death last night and that if she wants to have her burned, so be it. Fiona laughs and says she plans to do no such thing, that what she and the girls demonstrated last night was true grit. Fiona says that, now, she finally has hope for the future of this coven. Fiona says, “You really are my daughter, whom I’m so proud of.”

Cordelia, upset, says, “Now you’re proud? Hell, if I knew how easy it was to win your approval I would’ve tried to kill you years ago.” They laugh.

Fiona notices a silver bullet on the table. She picks it up but then drops it immediately. She can sense it’s blessed. Witch hunters. Cordelia says, “When I found it last night, I’ll admit that I was glad you were still with us. We need you now. More than ever.”

Fiona walks outside to pick up a package that was left on the doorstep. It’s a box. She brings it into the house and opens it. It’s Madame LaLaurie’s head. Her eyes open and she screams heeeeeelp.