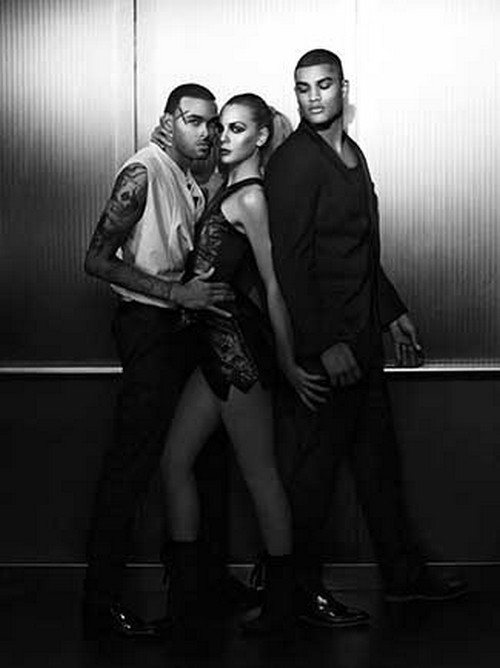 TGIF CDLers!  Tonight on the CW Tyra Bank’s reality show AMERICA’S NEXT TOP MODEL returns with a new episode called, “The Guy Who Gets a Weave.”   On tonight’s show the contestants get make-overs, where, surprisingly, a few of the men have meltdowns over their new looks.  Did you watch last week’s episode?  We did and we recapped it right here for you.

On last week’s show a vertical runway in the rain shook up the models – The models had to compete in a vertical runway down the side of a building in the pouring rain. Then, the contestants were paired up and photographed in a mock-wedding photo shoot, which brought back painful memories for a recently divorced model.   By the end of the episode the models heading home with the lowest score was Bianca and Chris S. went with her.

On tonight’s show the models get a lesson in chemistry as they pose alongside sexy supermodels Alessandra Ambrossio and Rob Evans in a risqué photo shoot. The contestants get make-overs, where, surprisingly, a few of the men have meltdowns over their new looks.  It is the same thing every season these models never learn, shut up and put up with the make-overs.

RECAP: Hormones are working overtime in the house and everyone feels like they are struggling with the fact that there are both men and women in the house.

Don thinks he could be the new face of Guest, he is an aspiring rapper and thinks it improves his modelling skills.

Tyra and Rob meet with all the models to announce that they are coming clean about their relationship, they are a couple – no, they have never kissed and never touched. So the next challenge the models are going to have to create chemistry in a photo. Rob and Tyra do a little sample of chemistry to teach the models how to do it. Cory has to pair with a girl and does really well faking his masculinity. Norman is so awkward, it looks like he has never been with a girl. Alexandra got paired with Phil and finds there is nothing remotely sexy about him. Johnny walks in with a whip and tells them that the shoot is about sexy fierce. There is a surprise, Alessandra Ambrossio and both she and Rob Evans will be modelling as well.

Sarah Silver is the photographer, Phil and Jeremy are wearing leather shorts and are being dominated by Alessendra who has a whip. Phil doesn’t do too well because he is really uncomfortable. Chris and Jiana are next, they did well and took all the tips they learned into the shoot. Don doesn’t do well with Alexandra, he felt he had to work it harder because Rob was in the shoot. Jourdan and Jeremy do well, so do Cory and Nina. Mike has trouble channeling his emotions.

Makeover day is here; Don is going Blond, Chad as well. Cory is shaved bald and having a hard time with it. Nina goes red, Chris is blond. Some big guy named Harry who is incredibly hairy comes in to the salon to announce that the men are going to be “manscaped”, which is body waxing. Jourdan has been turned blond and because she has never finished high school, she just doesn’t want anyone to think of her as a dumb blond. Chlea and Kelly make up, since it is makeover day they put their past squabble behind them. Phil gets extensions and he just doesn’t like the Jesus look. In the end, Phil loves his new look and is going to totally have fun with it.

Chlea’s confidence level has gone through the roof while Cory is having a hard time with being bald.

Time to add the judges scores with the social media scores to see who stays and who goes.

The first person to be called had the highest score and best photo of the week, it is Mike; he wins the key to the Tyra suite. Runer up for best photo is Jiana. The last two standing are Chlea and Don; one of them are going home. Tyra tells Chlea that she looks stunning but the judges question her desire to be in the competition and the industry in general. The judges are unsure about the two of them, Don stays, Chlea is going home and she looks pissed. Tyra tells Chlea that she has a chance to come back, the person with the highest social media of those voted out will return.