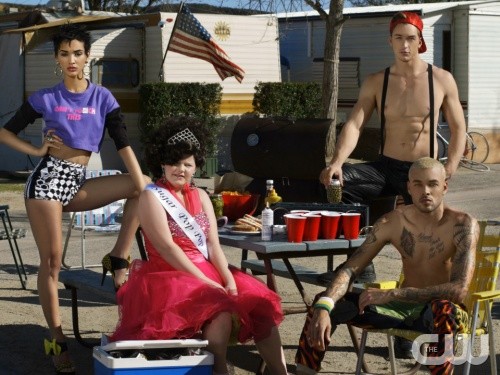 TGIF CDLers! Tonight on the CW Tyra Bank’s reality show AMERICA’S NEXT TOP MODEL returns with a new episode called, “The Girl Who Went Around in Circles.” On tonight’s show the contestants are styled in “trailer-park chic” for a photo shoot. Did you watch last week’s episode? We did and we recapped it right here for you.

On last week’s show the models got a lesson in chemistry as they posed alongside sexy supermodels Alessandra Ambrossio and Rob Evans in a risqué photo shoot. The contestants got make-overs, where, surprisingly, a few of the men had meltdowns over their new looks.  It is the same thing every season these models never learn, shut up and put up with the make-overs.

On tonight’s show the models have their balance tested when they have to walk on a spinning runway during a turntable challenge judged by the editor-in-chief of Nylon Magazine, Marvin Scott Jarrett. Then, the contestants are styled in “trailer-park chic” for a photo shoot.

RECAP: Nina has a connection with Chris and knows what it is like to be misunderstand. He tries to explain to the other house guests that he is not trying to come off he way he is, he hopes he hasn’t offended or hurt anybody. Mike is not going to feel sorry for Chris because he doesn’t have coping methods.

It is time for the next fashion show, in a couple of hours the runway will be finished and there will be a packed house. Marvin Scott Jarrett from Nylon Magazine tells everyone that the runway will be spinning but it is all worth it, the winner will win a spread in the magazine.

It is time for the show and Nina is freaking out, she sprained her ankle and doesn’t know if she can do this.
Ashton Micheal and Kimberly Gordon are designers and they are there to help the models. Jeremy is getting edged up to make him look like a man.

Jeremy and Mike did not look comfortable and Ashton Michael really noticed that. Jourdon is the winner of the competition, she gets a spread in Nylon magazine and she gets to keep her clothes from the show.

It’s time for the photo shoot, the photographer today is The Cobra Snake and he grew up in a trailer park, so he feels right at home on the set today that is “trailer-park chic”. Kanani does well, but Jeremy has a hard time with the light reflecting in his eyes. Don also does well. We are on to Mike and Alexandra; they near the pool and Mike is not doing too well.

Chris lived in 38 different places and Jourdan can relate to him. They are teamed together and do very well.  Jiana and Marvin get close and they don’t look too posey but Marvin is missing the facial. Cory does very well with Renee. Nina is worried that Phil can ruin it for her because he keeps make stereo typical white trash jokes. Nina is a bit lost in the shoot and Phil does so well that he gets a high five by The Cobra Snake.

Time to add up all the scores and see who is staying and who is leaving. The first name called is best photo and gets the keys to the Tyra suite, it is Jourdan. Then Nina is called, Phil, Don, Chris, Marvin, Jiana, Cory, Kanani, Alexandra, Renee.

It is between Jeremy and Mike, two great men stand before Tyra but only one is moving on and that is Jeremy, who is the youngest model in the competition. Mike is going home, the fans have sent him home.