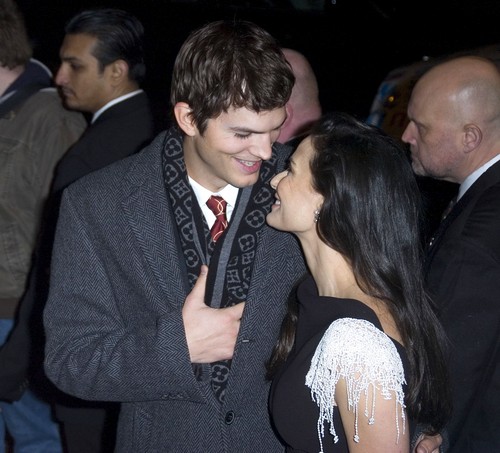 Ashton Kutcher is probably jumping all over the place, since his divorce to Demi Moore was finally, final made official this week. It’s been almost two years since Ashton separated from Demi, and he’s been dating Mila Kunis pretty much since then. Demi, on the other hand, went through a variety of breakdowns after the initial breakup, but she definitely looks like she’s finally recovering.

Anyway, the documents for the divorce were filed by Ashton’s lawyer on Tuesday afternoon, even Ashton initially filed way back in December of 2012. Obviously, the hold up was over money, as it always seems to be in Hollywood. Since Demi wanted spousal support, most of the delay was over her claim to Ashton’s money, despite the fact that she has so much more than him. It was a ridiculous way to postpone the inevitable, and it actually worked – sort of. Ashton reportedly did end up settling financially, and he apparently gave Demi ‘more than he had to’. But hey, you gotta do what you gotta do.

It’s not like he had much of a choice, if the rumors of a pregnant Mila Kunis are true. I don’t think Ashton would want to be married to Demi Moore while dating another woman pregnant with his child, especially since they wouldn’t be able to get married either. This way, Ashton is free to get married to Mila, if they wish to do so. Engagement rumors about the couple have been circulating around for a long time, so it wouldn’t be much of a surprise to see the two get married soon.

What do you guys think? Why do you think Ashton finally settled? Was he just sick of squabbling, or did he have another reason? Let us know your thoughts in the comments.