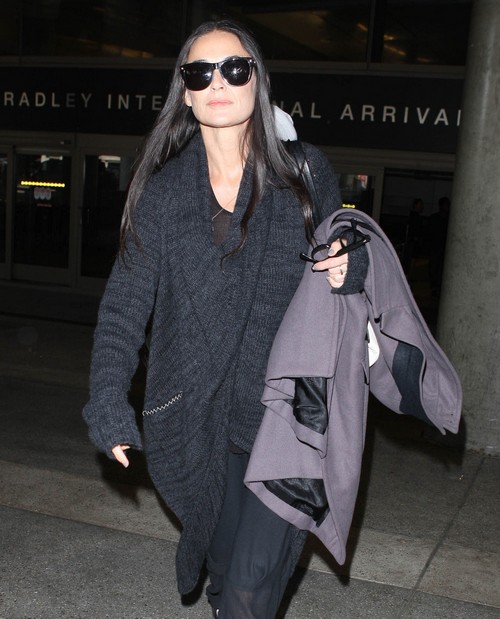 As Demi Moore‘s divorce to Ashton Kutcher finally starts to get finalized with a settlement being reached, Demi has to now come to terms with this separation. For the past two years, I think she’s been living in a state of denial, and we’ve seen her dip to some incredibly uncomfortable lows in her private life. She got herself out of that rut, but has she finally moved on?

According to a report from Grazia, Demi has finally come to accept that Ashton has moved on, and recently traveled to a retreat in India for ‘spiritual cleansing’. Demi reportedly spent three days at a silent retreat at the Tushita Meditation center in Dharmsala, and then another three days at a conference hosted by the Dalai Lama. A source explains, “The trip’s goal was a final cleansing of Ashton. It was tough for her. While she’s comfortable being alone, it was incredibly challenging not being able to interact. Demi continues to seek help for her long-term battle with drug and alcohol addiction and after she split from Ashton she feel back into an addictive trap. She’s conscious of not letting the divorce send her back into a dark place.”

The retreat was reportedly recommended by Russell Brand, who clearly has a close affiliation with spiritual retreats in India after having gotten married in one. Whatever else it did, the source claims that the retreat helped Demi move on from the divorce finalization, and they also add that Demi has finally come to accept Mila Kunis, Ashton’s current paramour and the woman he allegedly left Demi for. The source explains, “Demi says she is now at peace with the divorce. But she felt she needed to clear her head of any negative energy. Demi now insists she is fully cleansed of Ashton and is even ready to welcome Mila into her life.”

Uh. Will Mila be in her life? Ashton stays in touch with Demi’s daughters, so it makes sense that Demi and Ashton would have to stay on good terms. But I don’t think Mila will feel it necessary to communicate with the ex-wife of her current [rumored] fiance.