Britney Spears Warns Justin Bieber Not To End Up Like Her! 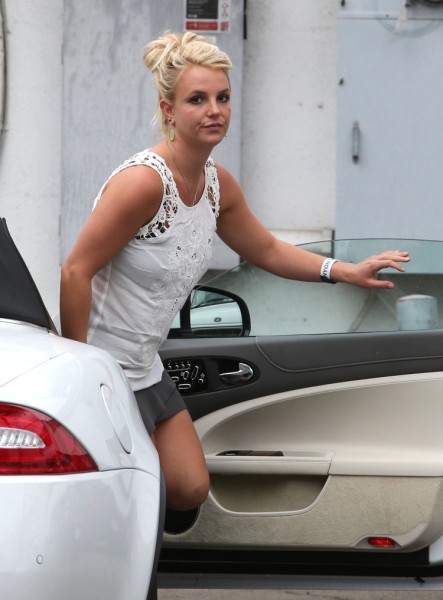 I feel like I’ve been screaming this for months when it comes to Justin Bieber. Britney Spears and he are basically the same person. He just needs to shave his head. It’s coming. I promise. Their meltdowns are so similar. They f-cked up their teeny-bopper relationships with Justin Timberlake and Selena Gomez and couldn’t handle their shit afterwards. Britney found her solace in marriages and babies and Justin is crying his eyes out in between fake boobs and joints (and the occasional Selena hook-up). That’s one thing I have to give Timberlake credit for – he never went back. Why can’t Selena get that through her head?!

And clearly I’m not the only person who sees the similarities. According to The Sun, Justin’s people are so worried about a full-on Britney meltdown that they’ve asked the pop idol to talk him off the ledge. Is like the TV show, Scared Straight? God I love that show. How could you not piss your pants when you’ve got those tatted-up incarcerated dudes screaming down your throat. I’m not a juvenile delinquent but even I take a second to check myself after I watch one of the episodes.

But what does Britney Spears warn Justin Bieber about? What does her speech sound like? “Hey! Don’t be like me! Don’t marry a lazy douche… team up with Sam Lutfi… let your dad give you special pills and then convince you to do a Las Vegas show when clearly you’re not mentally prepared… host the X Factor because your career can’t possibly by over by 30!”

Any one one of those reasons would keep me from spitting on another person in anger. But that’s not really fair to Britney. With her you get the feeling that she’s just not all there. There’s a fragility and delicateness to her crazy whereas Justin’s just a spineless, entitled little twerp. He acts up because he’s an asshole. Britney is  troubled. They are two very different types of lost. Kid Rock had it right. If anyone should be warning Justin Bieber right now about his piss poor behavior it’s Vanilla Ice. Now that’s a Scared Straight I’d love to watch!