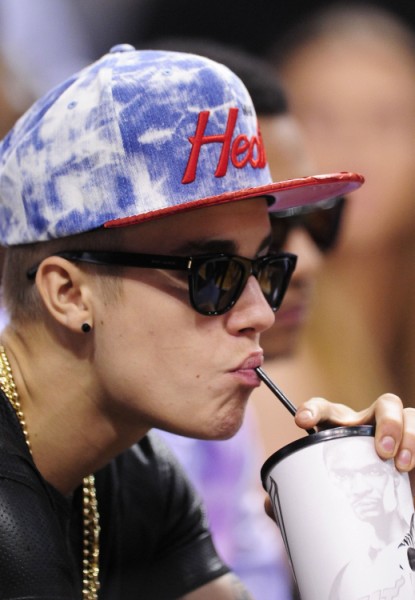 Over the weekend in Ohio, Justin Bieber allegedly spit in another man’s face after he didn’t get his way. According to TMZ, while at a 21 and under nightclub, Justin’s people accosted the man, who works as a DJ, and took his camera away. I guess they thought he was taking pics of Justin. In case you forgot, Justin is not 21 and gets kicked out of more clubs than anyone I’ve ever heard of.

Well, it turns out the DJ didn’t have any pics of Justin on his camera but that didn’t stop Justin’s dudes from taking their nonsense to their leader anyway. After hearing the story, Justin went up to the guy and started screaming at him like the bad ass that he is and spit in his face. Old news right? Justin tends to like to spit. That’s why I know this story has to be true. Justin never swallows.

The best part though? The DJ got tested for hepatitis after it all went down! Tests came back negative. Too bad! How amazing would that story be? It would truly be the gift that kept on giving! The DJ plans on pressing charges and Justin’s people are staying silent on the situation. I would too.

I blame Selena Gomez. She’s supposed to be this calming influence but it looks like Justin’s still up to his same old shit. I just don’t get spitting in someone’s face. Go ahead, have a confrontation. Scream at someone. Try to get your point across. Argue to your heart’s delight. But why spit? Justin Bieber could at least be a man and fake a punch. Spitting is for bitches. Why work on your muscles so much if you’re just going to spit during a fight? This kid is such a boring disappointment.