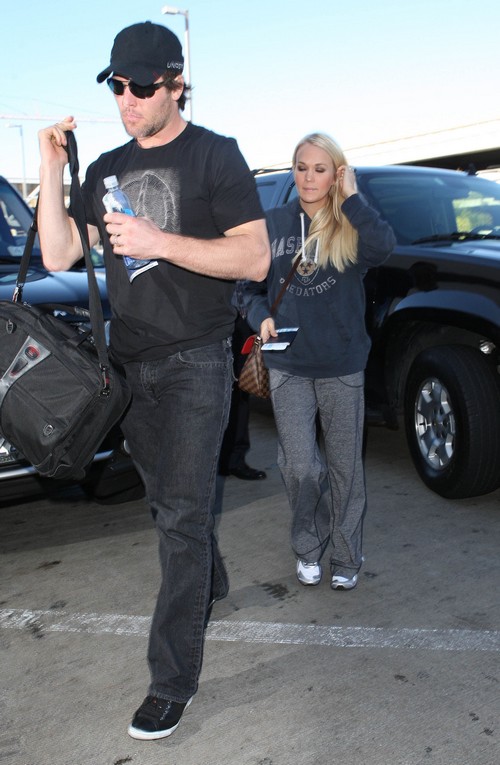 A new report from the National Enquirer claims that Carrie Underwood has been getting rather close to fellow country music star Brad Paisley, who happens to be married. Carrie has been with husband Mike Fisher for a couple of years, and Brad’s been married to his wife for even longer than that. So could there be truth to this?

The Enquirer does make the distinction that Carrie and Brad haven’t necessarily ‘cheated’ physically, but they have been getting very, very cozy. Apparently, the two ‘sparked rumors’ after the November 6th Country Music Association awards, where they were seen giggling and laughing together. And Carrie’s marriage to Mike has been rumored to be struggling of late, reportedly due to fights over having children and the time they’re spending apart.

A source explains, “In recent months, as she’s faced one marriage crisis after another, it seems like Carrie is leaning on Brad more than ever. They text and email each other constantly, and Carrie confides in Brad about all the problems she and Mike are having.”

Apparently, both couples live close to each other in Nashville, so Carrie and Brad often meet for coffee or lunch. Umm…. wouldn’t their respective partners be a little suspicious of the time that Carrie and Brad are spending together, if this report is indeed true? I get that there has be elements of trust in marriages, but if Carrie and Mike really are going through a rough patch, I find it odd that he wouldn’t suspect anything. But then again, maybe Carrie and Brad really are just good friends. Yeah, it’s Hollywood so that’s unlikely, but we never really know until we know.