Catherine Zeta-Jones Caught Cheating TOPLESS With Another Man – Can Michael Douglas Ever Forgive Her? 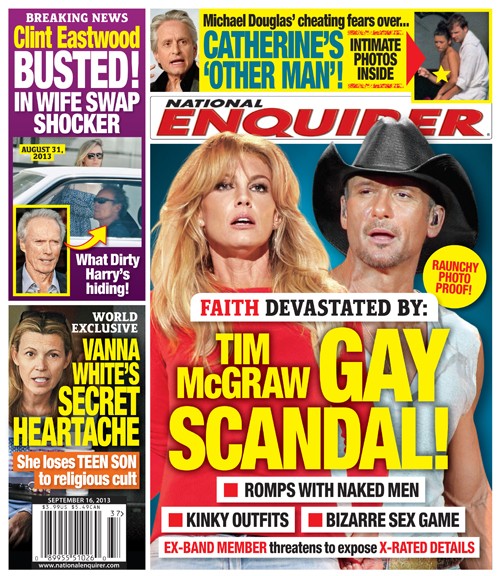 On this week’s cover of the National Enquirer, the notorious mag has come out with some explosive allegations. Like if you truly thought Michael Douglas’s declaration that him and wife Catherine Zeta-Jones were on a break then I’m sorry to tell you that was only the start of his lies. Was he in denial or did he just not know about Catherine’s other man.

According to the New York’s Daily news, Michael had addressed talks of a crisis by saying “No, I think the press has a crisis. We, we are fine. My wife and I are, are fine.” You’re not as fine as you thought, Michael. Practically in bright neon signs Catherine has taken the “break” to mean she could go around topless with other men. The rest of the more intimate photos can be found in this week’s edition.

No one really saw that coming except. If anything the first person we all had pinned to cheat should have been Michael. What with all of his previous talk of how oral sex gave him throat cancer; he really was in the running. Then for the marriage to completely deteriorate now, because you know it will, it would have been Catherine’s entire fault. It’s not fair but then again she shouldn’t have been the last one to cheat or dumb enough to get caught.

Anyways moving on. The next story, this time the main story is a bit of a mind bender. Tim McGraw has a gay scandal. If you’re confused then so am I. Wasn’t it only recently that Faith Hill though her biggest threat was the little man-eater Taylor Swift? Guess she really was paranoid on that one. Her biggest competitor turned out to have a whole lot more than she can ever offer. The news was revealed by an ex-band member.

The story goes “that Tim’s special brand of pranks seem to indicate that he is interested in men as more than just friends. Apparently Tim’s hijinks include a whole lot of ass-slapping, nudity and he is known to make explicit comments about the size of his friends junk.”

My fellow writer is a bit iffy on believing that this story automatically mean bisexuality and so do I. This sounds more like what Tim always claimed it to be. Nothing more than a prank. Still as a precaution Faith should watch out for any fishing trips with the guys.

And lastly Clint Eastwood is still the same dog he’s always been. That new girlfriend of his isn’t as much of a stranger as we thought. No, she is the ex-wife of Dina Eastwood’s on-again off-again love interest. Talk about wife swapping. It was bad enough to watch the PG-13 version on ABC, no one wants to watch the rated R version play out in real life. Grow up people. Revenge sex was supposed to last only through your twenties. What ever happened to keeping personal business private?