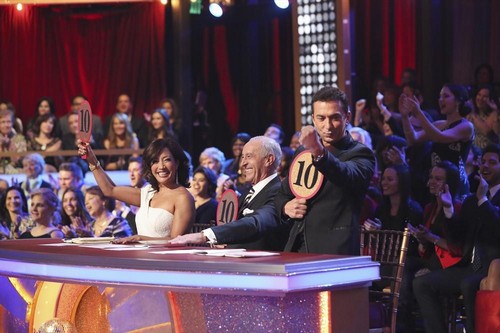 Tonight on ABC after week’s of intense competition on season 17 of Dancing With The Stars  we are down to the final evening and one of the three remaining contestants will take home the coveted Mirror Ball Trophy.  Did you watch last week’s episode when the celebs learned competed in three dance routines.  We did and we recapped it right here for you.  If you missed any of the performances from last week, we have all the videos HERE for you to watch!

On last night’s show the four remaining couples competed in three rounds of dance. In the first round, each couple took on the “Judges Pick” and repeat a selected routine from earlier in the season. In round two, the couples were challenged to a Samba relay, where each pair dances to a different section of the same song. In the last round, and one of the biggest competitive dances of the season, the couples took on a supersized freestyle featuring special effects, additional dancers and unexpected surprises. At the end of night, Bill Engvall and Emma Slater were sent home.

On tonight’s show we will see the last element of competition, the couples will perform a new routine as part of a “24 Hour Fusion Challenge.”  Last night, the remaining couples chose songs for their competitors that fuse two contrasting dance styles and they had less than 24 hours to prepare that dance for judges’ points tonight. The finale tonight will feature performances by Lady Antebellum who will perform their new single “Compass,” and Enrique Iglesias will sing his current hit “Heart Attack.” The entire season 17 celebrity cast returns. In addition, Ylvis will perform their hit single “The Fox,” accompanied by select celebrity and pro dancers. At the end of the night, the public vote from Monday night will be combined with the judges’ scores from both nights to crown the Season 17 Champion.

RECAP: The show begins with a red carpet performance from all the dancers, celebrities and judges. Enrique Iglesias now performs his current hit “Heart Attack.” Last night viewers were able to Tweet which freestyle performance they would like to see again, they choose Amber Riley and Derek Hough’s performance.

Now we have another music performance, this one is by Ylvis and he performs his hit single “The Fox”. Now all the female dancers are on stage to perform a routine together.

Bill Nye is back dancing the Cha Cha Cha to “Weird Science” and the crowd loves it. Elizabeth Berkley and her partner Val Chmerkovskiy are now dancing and it is another crowd-pleaser.

Jack Osbourne and Cheryl Burke are busy practicing their fusion dance. We now get a look back to Valerie Harper who was diagnosed with brain cancer and came on the show to thank everyone for all their love and support through her battle. Valerie joins the stage with her partner, Tristan MacManus to “What A Wonderful World” performed by Colbie Caillat.

Now we get to look back at Snooki, then she is performing with Sasha Farber. We now see Amber Riley and Derek Hough practicing back stage and they are both excited to get on stage.  Lady Antebellum performs their new single “Compass.”Leah Remini and Tony Dovolani perform. Bill Engval and Emma Slater are back now and dancing the Samba.

Up first tonight for the Fusion Dance is Corbin Bleu and Karina Smirnoff dancing the Cha Cha/Fox Trot. Judges Comments: Len “Corbin you are a fantastic dancer, the Fox Trot was fantastic, the way you swayed was rare. You messed it up in one little part.” Bruno “With such a short time that was incredible. Len is right, your gliding was beautiful, but you went wrong in the Cha Cha Cha.” Carrie Ann “I have so much respect and love for you, I am so impressed, unfortunately you lost it in the Cha Cha.” Judges Scores: Carrie Ann 9, Len 9, Bruno 9 = 27, the total for both nights is 89. [VIDEO HERE]

Jack Osbourne and Cheryl Burke dancing the Salsa/Paso Doble. Judges Comments: Bruno “A wonderful fusion of two dances, in and out, your timing was right, you did it.” Carrie Ann “I love the two different styles, but you were too flat footed on the Salsa.” Len “You have given me the most pleasure to watch, week after week you improve, you have climbed a mountain, well done.” Judges Scores: Carrie Ann 9, Len 9, Bruno 9 = 27, the total for both nights is 84. [VIDEO HERE]

Amber Riley and Derek Hough dancing the Samba/Quick Step. Judges Comments: Carrie Ann “Oh my goodness, you guys just created a whole new dance. You were effortless, well done.” Len “I have been critical, I never lost the thought of the joy I get when I watch you dance, you bedazzle you little sausage.” Bruno “Your performance was effortless, you did not put a foot wrong.” Judges Scores: Carrie Ann 10, Len 10, Bruno 10 = 30, the total for both nights is 94. [VIDEO HERE]

The winner of Season 17 Dancing with the Stars is Amber and Derek.