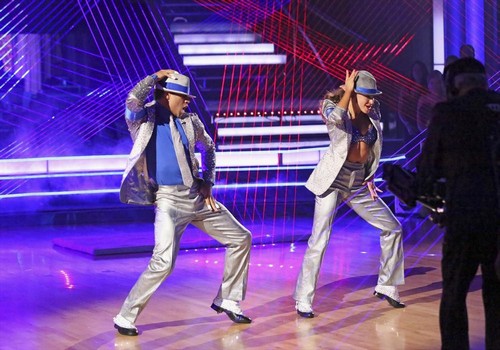 Tonight on Dancing With The Stars it is the Grand Finale and the couples performed one last dance, a fusion dance.  For his fusion dance Corbin Bleu danced a Cha-Cha Foxtrot Fusion. If you missed tonight’s show you can read a full and detailed recap, right here.

On tonight’s show we will see the last element of competition, the couples will perform a new routine as part of a “24 Hour Fusion Challenge.”  Last night, the remaining couples chose songs for their competitors that fuse two contrasting dance styles and they had less than 24 hours to prepare that dance for judges’ points tonight.

On last night’s show Corbin was given a 30/30 for his Freestyle routine and a 62/65 for the evening total .  Carrie said about his dance: “This was a big bite to chew, you nailed it.” Len simply gives a standing ovation.” If you missed any of last week’s performances, you can check out all the videos, right HERE.

Judges Comments:  Len “Corbin you are a fantastic dancer, the Fox Trot was fantastic, the way you swayed was rare. You messed it up in one little part.” Bruno “With such a short time that was incredible. Len is right, your gliding was beautiful, but you went wrong in the Cha Cha Cha.” Carrie Ann “I have so much respect and love for you, I am so impressed, unfortunately you lost it in the Cha Cha.”

Watch the video below and let us know what you think? Do you think Corbin did enough to win the Mirror Ball trophy tonight? Sound out in the comments below!