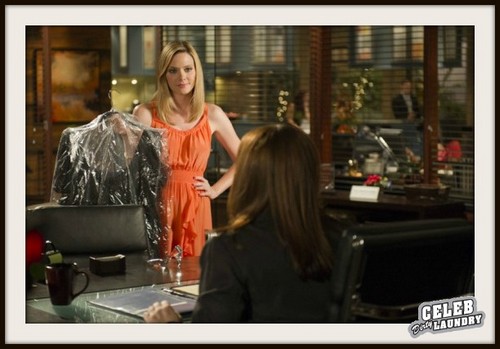 Tonight on Lifetime DROP DEAD DIVA returns after an almost 2-month hiatus with a new episode called, “Trust Me.” On tonight’s show Owen has some tough news to share with Stacy.  Did you watch the last episode before the break?  We did and we have a full and detailed recap, right here for you.

On tonight’s show when Jane defends a former troubled socialite, a series of unfortunate legal turns puts the very existence of Harrison & Parker in jeopardy. Meanwhile, Grayson defends a young man thrown off of a commercial flight because he claims to be a vampire. Lester Tuttle (Wally Langham) continues to mettle in the affairs of the firm. Owen has some tough news to share with Stacy.

Tonight’s episode is going to be another great one, which you won’t want to miss. So be sure to tune in for our live coverage of Lifetime’s Drop Dead Diva Season 5 Episode 9 “Trust Me,” tonight at 9PM EST! Remember also to bookmark Celeb Dirty Laundry and check back here for our live Drop Dead Diva recaps, reviews, news, and spoilers!

Talk about awkward. Jane was ready to admit to her feeling with Grayson when she saw him making out with the newest PA at the office. Now she’s haunted by sex dreams that only involve her witnessing Grayson and Nicole get it on in an elevator.

Shockingly she does find herself alone with Grayson and Nicole in an elevator. They didn’t break out into anything Rated R but still that was eerie. It happened after they had all left a benefit for abused women. The whole firm was there pretending like everything was ok while schmoozing. What they didn’t take in was that Mr. Tuddle would be there as well circling them like a shark. He at one point got Jane alone when he then expressed his dismay that she wasn’t hired on as a partner long ago.

Jane is uncomfortable with this area of conversation and finds the host and friend Violet to help her escape. Although she didn’t count on Violent having problems of her own. It seems her neighbors don’t like a women’s shelter next door and they made a complaint with the zoning. They’re trying to shut her down just they wouldn’t lose property value.

Later as Jane is catching up on zoning laws, Owen finds her. He’s been hitting the bar hard and he wanted someone to talk to about the firm. They’re still pretty uncomfortable around each other but at least he’s talking about Parker’s betrayal with someone. Kim is on maternity leave and it’s not as if he could go to his own possible baby mama. Not when he blindsides Stacey with official papers on custodial rights.

Stacey wasn’t ready for that. She didn’t know they needed any paperwork. Owen doesn’t want the child to know he’s the biological father until the child reaches 16 years of age. Stacey didn’t like the idea of holding another secret on top of Jane’s. Jane simply told her to talk it over with Owen.

Grayson took a case based on a judge’s demand. He didn’t know he’d be the defense for a self-proclaimed vampire. He feels the kid is misguided but the media are having a feel day with the story.

Jane royally screwed over her client. She got the zoning committee to lay off of Violet. All they had to do was pay for some construction work. Yet Violet can’t get her hands on that kind of money because her bother/trustee refuses to waste it on her hobby. They tried to reasonable to with him and when that didn’t work they took him to court.

In court was where everything went wrong. Jane had accidentally questioned the trust. Under ruling of the trust if it’s ever question then it dissolves. Violet has lost all of her money and her brother couldn’t be more excited. Jane wants to fix it but Violet refuse to listen anything else she has to say. She’s in a worst position than when she began.

Kieran the vampire was kicked off a flight for weirding out the flight attendant by proclaiming to be a vampire. Two minutes in the court and Grayson had the whole case thrown out. Then Kieran got fired from his job. Grayson doesn’t really want to help him but once he understands that Kieran became a vampire to stop being bullied, he knows that for once someone needs to protect this kid.

Grayson wanted to Kieran’s employer in for unlawful dismissal by saying they could be prejudice against a vampire. The other side then hid a garlic clove under Kieran’s seat to disprove he was in fact a vampire. This all happens in open court where Kieran becomes so embarrassed he tries to leave. Grayson talks him from backing down.

Violet took Jane to court for incompetence and malpractice. When she was mad she brought up legal charges and to Jane couldn’t handle it. She literally feel apart onstage. Thereby ruining any chance of winning though she’s holding out hope. Parker isn’t. He won’t with a malpractice suit on the firm. He’ll give up all his rights just like that leaving Kim and Owen to pay for any fall out.

Jane does fix it. How? She had planned it all out. She never would make such a big mistake on purpose. She and Violet acted out the whole scenario to get Parker to sign off. She knew how to win Violet’s case from the beginning. That’s what she ended up doing. Violet has control of her trust and Jane has negotiated a partnership for herself.

Jane wants to be celebratory but when Grayson tells her, per company policy, he’s dating Nicole. She takes it well in front of him and then freaks out on the balcony. Paul tells her that maybe she shouldn’t give up on him just yet.

Stacey tells Owen she signed but now he’s questioning his involvement. He rips the contract saying they could do it on trust. When Stacey tells him she’s pregnant, he gets so excited he kisses her. Not a peck. It’s a drawn out kiss that she’s not calling a halt to.