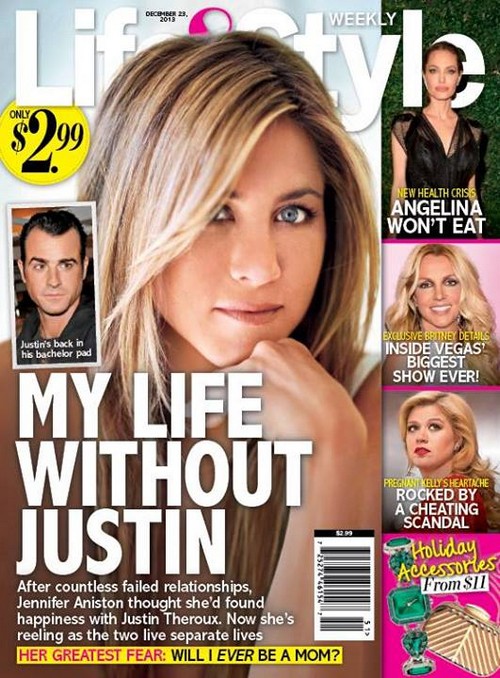 Just because Jennifer Aniston and Justin Theroux popped up together once last week, don’t think for one minute that it means that their relationship is on solid footing. In fact it’s quite the opposite. Something drove Justin to decide to move back to NYC this past September and it wasn’t for his new HBO show because that doesn’t actually begin filming until February! The truth is that Jen and Justin have been rocky for a long while and putting 3,000 miles between them seemed to be a good idea.

According to the Dec. 23rd print edition of Life & Style, Jen is learning to live as a single woman again and her life without Justin seems to be a bit of a midlife crisis. We have watched her cut off her hair into a style that she previously hated and then went for a new piercing or two. Then when she realized it looks like a midlife crisis she hired lifestyle guru Kate Young to try and make sense out of her behavior – at least for the public to see. Behind the scenes, even when Jen and Justion spend time together it fails on all levels leaving her depressed.

Angelina Jolie has never exactly been one to take care of herself and according to sources close to the actress, she is avoiding food at all costs. Stress seems to play a factor in Angie’s weight and whenever it plummets you can bet she’s dealing with serious crap behind the scenes.

Did Kelly Clarkson’s new husband cheat on his pregnant wife? Not one but two women have come forward claiming that Brandon Blackstock has had affairs with both of them. Life & Style has the latest on the scandal that is still developing. Do you think that he strayed already? Tell us your thoughts in the comments below!