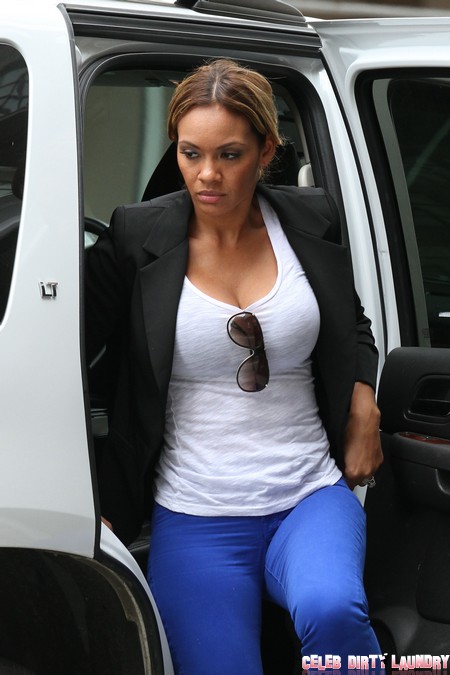 Well she finally revealed who was willing to date her within months of her split from Chad Ochocinco. Evelyn Lozada has finally given up chasing after other ball players in order to nab Los Angeles Dodgers and official Baby Daddy Carl Crawford. Carl is an outfielder for the team and who reportedly has a salary of 20 million.  Hate to say it because, as a woman, I shouldn’t condone Evelyn’s methods but Carl is the perfect catch for Evelyn. She tried dating basketball stars (its how she ended up on Basketball Wives), she tried football stars (their money isn’t as reliable plus Chad was a definite mistake), and now she’s moved into the world of baseball. There she found a guy to attach herself to for the next 18 years and know with his money that she’ll never have to worry ever again. If only she had skipped over the other sports to get him directly.

Evelyn is a groupie. You can usually find her around any sports star with money and notoriety (pre-baby obviously). It’s how she was able to catch to her first and only husband, Chad. Before that all she could ever hook in was other women’s husbands so Chad was a nice change. Sadly he did not remain that way and soon assaulted her during their first year of marriage.  That marriage ended in September 2012 and yet a year later Evelyn is with another athlete but this time pregnant.

Shouldn’t she have given herself time to heal instead of finding another man to take care of her. This baby will be her second child; she already has a 20 year old daughter that is mistakenly learning that what her mom does (chasing rich men) is considered a profession. Evelyn makes it incredible difficult to use her name. No woman wants to call another out because it allows guys to think its okay – but Evelyn just pushes too many buttons.

Her career as an author is about dating/marrying a sports star. Her shoe boutique which she started after her break-up with Antoine Walker could have been the new focus of her life. She basically ignored it on favor of winning Chad. He inspired her to write a book but not make it on her own two feet. Now its Carl who can either make it work with her or make sure he doesn’t miss a payment any time over the next 18 years.