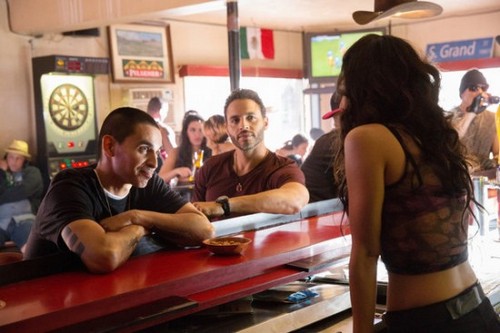 Tonight’s GRACELAND continues on the USA Network with a new episode, season 1, episode 8, called, “Bag Man.” On this week’s show Mike is forced to push his own limits for the good of a case.  Did you watch last week’s season premiere? We did and we recapped it here for you.

On last week’s episode the newly formed Briggs-Bello alliance is tested when members of the Caza Cartel head north with a deadly ultimatum. During the aftermath, Mike is forced to test his limits for the good of the case.

On tonight’s show Bello’s last strike to the Caza Cartel sets a war in motion that Graceland now needs to stop. While on her hunt for Odin, Charlie meets an unusual ally and Briggs comes face to face with the past.

I cannot wait for tonight’s episode 9 of Graceland last week’s episode 7 was fantastic.  The show airs tonight on USA Network at 10PM EST and we will be covering it with all the details.  So make sure to bookmark this spot, and come back for our live coverage of Graceland Season 1 episode 9 right here.  Enjoy the show folks!  While you wait for the recap, check out the sneak peek of tonight’s episode below!

Briggs remains bruised and too injured to leave his bed. He’s secretly ice packing himself thinking he’s in the clear when he’s still in danger. Johnny may have let go of his suspicious but Charlie isn’t willing to trust Briggs just yet. Lack of evidence doesn’t equal innocence to her. Although they haven’t let on to anyone else what they’ve been thinking.

It’s still all happy house. Right up to table talk turns to Bello. Bello is supposed to be seeing Jangles any minute now. Briggs casual ask when Jangles will appear to start looking for Odin. Charlie tries one more time to tell Briggs that instead of waiting they should find Odin first but he continues to block her off. No matter how reasonable her argument is.

Jangles did send a statement though. He cut of Bello’ man foot with shoes still on and left it hanging on cable wires. Briggs manages to hide his anticipation in front Mike and then the moment he has the chance he sets up a trap that ends up being for more than Jangles. He’s bait attracts Charlie.

In the meantime Bello is carrying on with his business. The Jangles problem can be handle by merely getting bigger guns. Bello is feeling safe but Mike has to talk to the men. They’re scared of a war with Jangles especially after what he just did to one of them.

Mike has other problems. He wants to move on Bello now yet Briggs keeps stalling. Even when Mike goes to Juan to get them to move he gets a no. They suspect Briggs of more with his stalling. Mike has to stay in the house a little more. The house isn’t safe and neither is he. Mike found a bug in a picture frame. The same one Juan gave him. These are the feds. To be bugged is not to be trusted. Paige sees him after he destroys the frame. She knows he’s hiding something even if he won’t tell her. The people that sent him don’t trust him and the people he spies on trusts him. Isn’t that strange?

Charlie finds the motel room booked for “Odin”. She breaks in and ends up dismantling Briggs camera he set up for Jangles. Briggs didn’t get to see the man that followed Charlie in. He’s an agent from Mexico. He tried to catch Odin. That’s all.

Mike returns to Juan demanding questions. Juan abused his trust for more than a case. Juan has a personal vendetta. His friend was Briggs’s commanding officer at another house like Graceland. That friend along with 4 other agents died in a mysterious house fire. Briggs is the only to survive from that house. Juan needs to catch him but Mike won’t work with someone bent on revenge so he walks. He’s not going to spy on Briggs.

Charlie checks up on the agent she met and he is what he said he was. Too bad for her Briggs isn’t. He’s using Jonny to find Jangles. During their bonding time, Jonny also mentioned how Charlie isn’t good with Briggs right now. She foolishly thought he could be Odin. They couldn’t help sharing a laugh over that.

Mike is warning Bello to be careful about Jangles threat when Briggs sees one of Bello’s men sell out the secret location. Luckily Mike figures it out pretty quickly that someone has broken into the house.

Jangles is good. He killed the agents outside first. He was halfway torturing Bello for information when Mike saved his “boss”. But no one is true match for Jangles. He stabs Mike before neatly escaping a house surrounded by Federal back-up.
Mike wakes in the hospital room with Paige at his side. He was still drugged up and at his low point when he decides to trust Paige with the truth. He thought she would understand but she can’t sympathize with a rat.

Juan is obsessed just as Mike feared. He’s willing to pretend to be Jangles in order to take down Briggs. He follows him to the beach. Briggs is drunk when he gets confronted. Juan tries to get him to admit to the truth but he stupidly draws his gun. Even while drunk, Briggs is better trained. He shoots and kills Juan thinking he killed Jangles.

The real Jangles is meeting with C harlie. He’s the agent from Mexico.