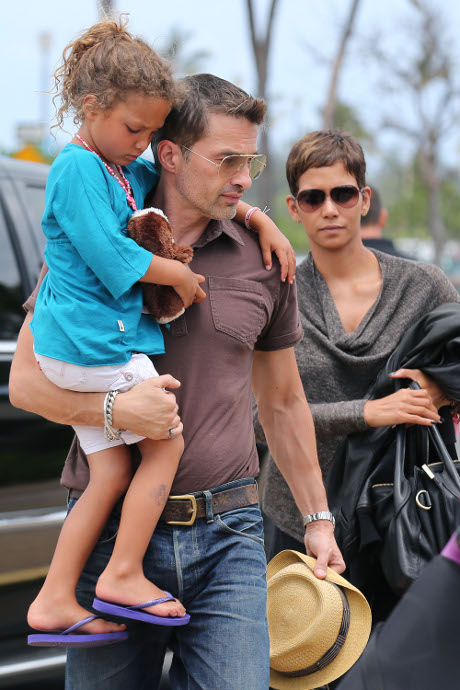 It was reported a couple of days ago that Halle Berry and Olivier Martinez had made a prenatal agreement over who would get custody of the baby in the event of a breakup [this agreement would also enforce who would pay for child support in such a case]. However, Halle’s lawyer denies the claims [via TMZ], saying that Halle and Olivier have not even discussed this.

Ok, so that’s a blatant lie if I ever saw one. There’s no way that Halle Berry, who went through a mess of a court case with ex-boyfriend Gabriel Aubry over her first child, wouldn’t think of every possible scenario for her second child. Is she risking what she went through with Gabriel happening all over? Where’s the guarantee that she and Olivier Martinez will stay together forever? As cynical as this sounds, celebrity relationships don’t make it 90% of the time, and Halle’s already been through a bad breakup once.

Anyway, so despite the fact that we all know he’s lying, Halle’s liar – oh, sorry, we meant lawyer [no we didn’t] claims that Halle and Olivier never drew up such an agreement. And then he adds one more line of lawyer speak – claiming that any agreement that concerns the rights of an unborn child and has not been ratified by a judge would be ‘unenforceable’. That’s fine, but who’s to say that whatever agreement Halle and Olivier drew up hasn’t been ‘ratified’? Also, even if they haven’t drawn up an agreement – which seems unlikely – they might just be waiting until the baby’s born to do so. After everything Halle’s been through, it’s just hard to believe that she wouldn’t take the necessary steps to protect herself and her child in the event of Olivier Martinez turning into Gabriel Aubry 2.0.

Let us know what you think in the comments – is Halle lying to us, or is she genuinely not getting any prenatal agreement? If so, do you think she’s making the right decision or making a big mistake?