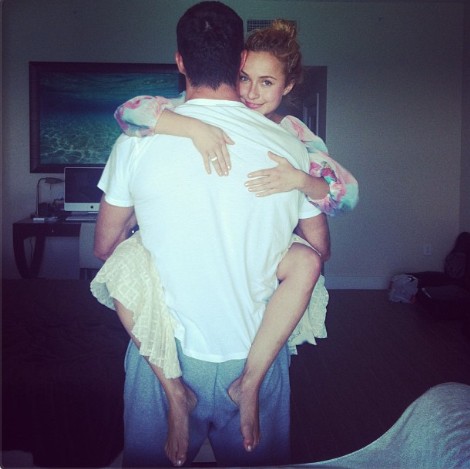 The are they or aren’t they rumors continue to circulate on overdrive as Hayden Panettiere plays coy over her engagement to the Ukrainian boxer Wladimir Klitschko. Stories first surfaced last week that Wladimir Klitschko proposed to the pint-sized actress but their reps haven’t issued any statements so far. It looks like Hayden might be issuing some statements of her own though. She just posted the Instagram pic featured above and, besides the fact that it looks like a giant is abducting a 10-year-old from her sleep, it also looks like an engagement ring is present. Look closely. It’s cleverly placed on her right hand.

She was also all smiles for the cameras as she showed off her hot little body in Miami over the weekend on the beach. She looks like she’s just dying to tell the world. What’s holding her back? Klitschko? Didn’t they break up before because he wasn’t a big fan of the famewhoring? I think that was it. She had to learn the Miley Cyrus hard way and cut back on all her gabbing about their relationship. He took her back though and obviously gave her what she wanted. But it’s subdued, right? Hayden Panettiere’s ring isn’t super gaudy from what I can tell but we’ll have to get a bigger pic to be sure. She obviously likes ’em big after all.

Jesus Christ, that’s an odd couple. Can you imagine the size of that baby? I almost feel sorry for her at this point. I don’t see how it works but it must. Mazel to them. Only how disappointed will Wladimir be if his kids are all elves like her? Do you think he’s thought about that?

So, is Hayden Panettiere engaged or is she just wearing any old ring? Would she be this exuberant if it was just any old ring?