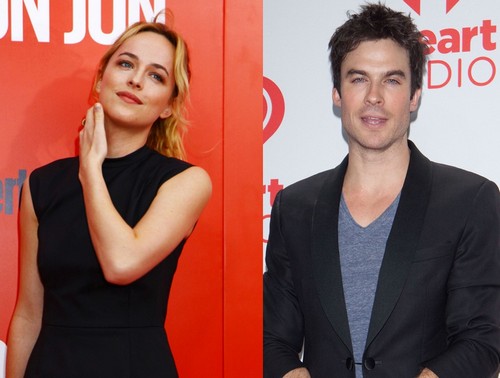 Now that Charlie Hunnam has departed Fifty Shades of Grey, saving himself a future of embarrassment, the search has turned to his replacement. According to certain sources, Ian Somerhalder is back in campaigning mode, and he’s desperately trying to get himself a screen test with Dakota Johnson, who plays leading lady Anastasia Steele.  Ian and Dakata have to work well together visually for the director and producers or there is no hope The Vampire Diaries star.

Now, we know that the author of the books, E.L. James, unequivocally does not want Ian to be Christian. And as the author, she probably has final say. But if Ian campaigns hard enough and he convinces them that he can do it, I’m sure she would come around. Besides, the studio and filmmakers are not exactly at a position where they can afford to be so picky. They know they’re not going to get any A-lister for the role, and that means they’re left with B-listers at best.

We know that Ian is obsessed with getting this role, and has been for a while. When Charlie got cast, Ian pretended like it wasn’t a big deal and he wasn’t actually that interested, but we knew the truth. Sources close to Ian admitted that he had high hopes at one point, but those were dashed when he realized that the studio probably wouldn’t hire a CW actor to headline their major studio film.

In the end, we know Ian would take the role in a heartbeat. But the actual question is – would the studio offer him the role? Will they be so desperate that they end up giving him the role? We’ll know the minute that Ian is in talks for the role, since I’m sure he won’t be able to contain his excitement long enough to send Twitter hints about it.

What do you guys think about Ian in talks to replace Charlie as Christian Grey? Let us know your thoughts in the comments.