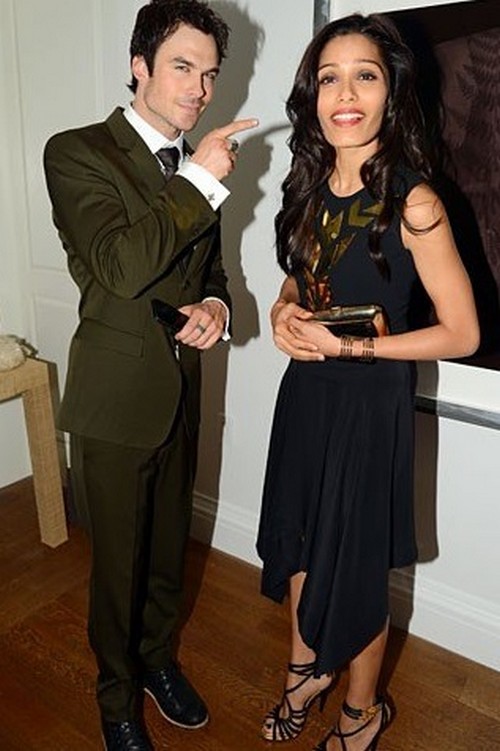 After just a few months apart, Nina Dobrev has moved on from Ian Somerhalder with Dancing with the Stars‘ Derek Hough. It wasn’t a coincidental relationship, considering that Nina and Derek’s sister, Julianne Hough, are best friends. However, there were so many rumors about Ian wanting to get back together with Nina that it’s clear that he must be devastated.

Several sources close to the Vampire Diaries set had initially stated [after Nina and Ian’s breakup] that there was a possibility that they could get back together in the future. However, it looks like Nina was never holding out for that. Obviously, if Ian did cheat on Nina, then it’s good that she didn’t go back to him. But Ian seems to be going out of his way to be photographed with several women the day after Nina’s news was confirmed via the tabloids.

Ian was at a dinner for Conde Nast this week, and although we’re just playing assumption with the photos available online, it looks like he and Freida Pinto were really hitting it off. Obviously, Freida’s attached to Dev Patel and has been for the last few years, but there’s no doubt that Ian was flirting with her. They’re both laughing and there are many, many, many pictures of them together for the evening. So is it a coincidence or calculated on Ian’s part?

If he’s still hung up on Nina, I could see how this might be his way of pretending he doesn’t care – even if he does. If he has genuinely moved on from Nina, then he might be trying to find a rebound relationship. Unfortunately, Freida’s taken – so he’ll have to find someone else.