Ian Somerhalder And Nina Dobrev Back Together And In Love! – Fifty Shades Of Grey Movie Forgiven 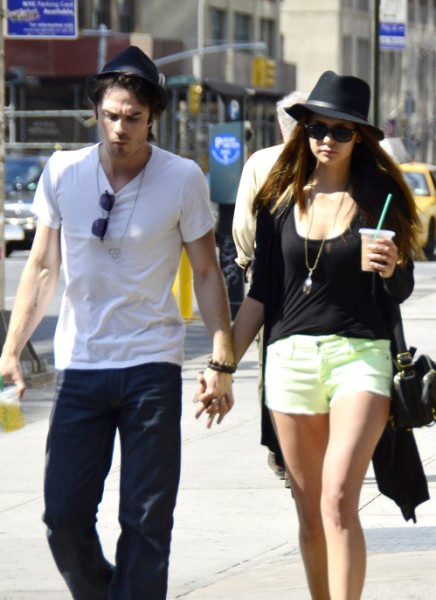 Could Ian Somerhalder and Nina Dobrev’s break have been of the Robert Pattinson and Kristen Stewart variety? Those crazy vampires are always up to something! A few days ago we reported that Ian and Nina had been spending more time apart leading some to believe that the couple called it quits on their 18-month relationship. Apparently a lot of you were pretty heartbroken over this. I’m still not sure why. Would you hate me if I said I’ve never watched The Vampire Diaries? I know! People love it. I just haven’t watched anything on the CW since Gilmore Girls went off the air. It’s still too hard….

Anyway, people assumed Nina was pissed because of the Ian Somerhalder/Fifty Shades Of Grey movie speculation but apparently all is well in their relationship. Now, I think most of the speculation is coming from Ian. I still don’t think he has a chance in hell of snagging that role despite his overwhelming desperation. He’s been campaigning hard for months – like Anne Hathaway hard. I kinda see it. He’s a scurvy, licentious looking dude but he can’t be on top of the list. I’m sorry all you Ian lovers out there but his star just isn’t big enough yet. That kid just never quite happens. He tries but there’s just something about him that turns people off. Is it the eyes? Are the too pretty? Why would a casting director pick Ian over Alexander Skarsgard or, rumor would have it, Chris Hemsworth? I still think everyone should take a cue from Emma Watson and run away as fast as they can from this probable shit stain of a movie but the studio still thinks it can get big-time names to fill the BDSM-crazed characters. If Ian Somerhalder is cast you know they’ve given up hope on this being a blockbuster – or at least I’ll just think that. So should the Ian Somerhalder and Nina Dobrev back together whispers lead you to believe Ian was passed over for the role or just that Nina is done holding the movie over his head?