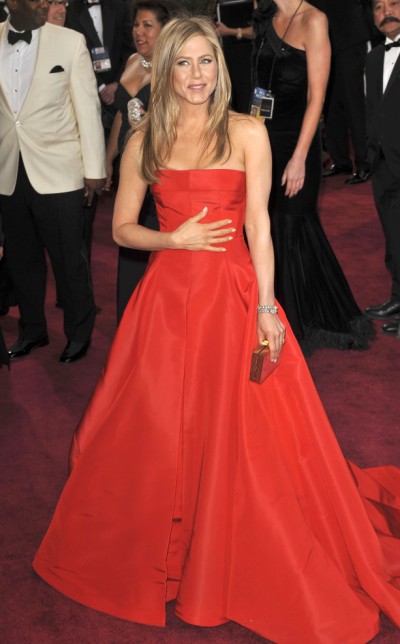 Despite fervent denial of a pregnancy, Justin Theroux and Jennifer Aniston couldn’t keep it together during the Oscar’s red carpet. Photos show Justin gently cradling Jen’s lower stomach, confirming what many have believed for weeks: the engaged couple are expecting. Whether you think their vanity will rub off on a child, creating a monster that will terrorize humanity or not, we’re super stoked to watch nine months of drama and maternity fashion unfold. Of course, there’s one issue: they’re not married! Jen’s family are Greek Orthodox, so this could turn into a huge drama. Fortunately, there’s still time, and Jen is stretching for a sprint to the altar.

“She has already checked off some major tasks on her to-do list, including choosing wedding bands, setting a date, and narrowing down dresses,” reports People Magazine, print edition March 11, 2013. “It will be a small affair with their closest friends,” a friend told the magazine. “Jen seems more confidant than ever, and they’ve become a great team.”

And why shouldn’t she? She’s financially set for life, has a hunky fiancé, and thousands of fans who will support her no matter how crappy her acting is! The only thing missing is revenge on cheating ex Brad Pitt, who she’s reportedly racing to the altar. At this rate, she’s sure to win. Jen’s also wanted a baby for the last decade, so she’ll be especially thrilled with the pregnancy. Sources have reported that she’s struggled with fertility, and there’s no word on if this is a natural pregnancy or if she had help! Do you expect Jen and Justin to follow through on a low key wedding, or will she want a lavish one to rub in Brad’s face? Is she pregnant for real this time, or just a bit bloated from her high-protein bean diet?