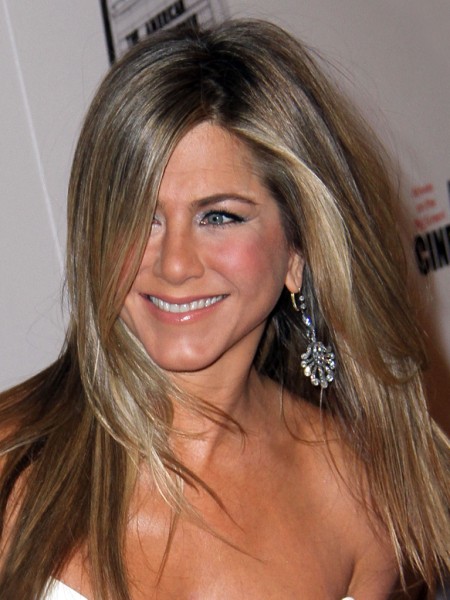 I’m not sure what’s worse, Jennifer Aniston’s movie career or the fact that she’s feuding with Kim Kardashian over a hair stylist. Is it sad that I sorta believe it though? This is clearly a tabloid story straight from the National Enquirer but this is hair we’re talking about – Jennifer Aniston’s bread and butter. You’re going to tell me she wouldn’t throw down over a stylist’s betrayal? Ya, I’m in 100% which either makes Jennifer pathetic or me although I’m pretty sure we both are at this point.

Here’s the long and short of it. Apparently Jennifer Aniston’s hair stylist, Chris McMillan, is spending all his time working with Kim now. This seems sketchy to me since Jen and Chris are partners in a new haircare line but whatever, Hollywood people are fickle biotches. Jen is so pissed over the whole thing that she even sent Kim a note telling her to step off but that just ruined her relationship with Chris even more. This is crazy awesome.

“Jen is stewing,” a source told the magazine. “Of all of the men in her life, Chris has been the one constant. He stood by Jen through her marriage and breakup to Brad Pitt and all of her love-life ups and downs. Jen expected he’d always be loyal. Now she’s furious – at both Chris and Kim – for the betrayal. Chris feels edged out by Justin, who he says makes Jen’s old friends uncomfortable by talking down to them. Chris is raving about how fun-loving and sweet Kim is… he says she’s a real breath of fresh air after having to constantly hear about Jen’s body insecurities and relationship traumas. Chris now likes hanging out with Kim much more than Jen.”

Well done Enquirer! This little story managed to get everything crammed into it: Jennifer’s obsession with her body, Jennifer’s paranoia over her loss of Brad Pitt; Jennifer’s choosing Justin over her gal pals. This is truly mastery at work.

And I buy it – every bit of it! Where are Sheryl Crow, Courteney Cox and the rest of Jennifer’s old hard partying friends? Have you seen Justin Theroux? This dude loves to talk down to people while he’s wearing a fedora and flexing his abs. He’s got to be insufferable! I’ve listened to a few of his interviews and, believe me, his is. What does this have to do with Chris McMillan? Nothing really. I’m just saying… I could see Jen drop her male friends just as easily as I could see her drop her girls when a dude finally comes around. And I can talk all day long about how intellectually lacking Kim Kardashian is but I doubt she has the self-confidence issues Jennifer does. Kardashians weren’t bred for self-analyzation which is why they can do all that crazy shit all the time and dust themselves off so quickly. It’s quite a thing to behold actually.

Do you believe in the Jennifer Aniston/Kim Kardashian feud? Is Kim actually a bigger star?