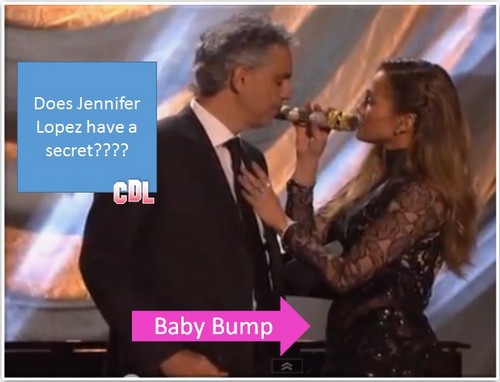 Could Jennifer Lopez be ready to expand her family with boy toy, Casper Smart?  If you tuned into last night’s elimination round of Dancing With the Stars then you’ll know exactly what I’m talking about. Jenny from the block is known for her revealing clothing choices and loves the world to know that she has made it back into tip top form after delivering her twins a few years back.

Last night was a lot different for J Lo. Instead she wore black with lace but those abs of steel sure weren’t where they usually are. Instead Jen looked to be really bloated – or early pregnant according to many that watched the performance. The diva has made no bones about the fact that she’d love to expand her family but has always said that having more children is something that she has left in God’s hands.

Jen and Casper have been a couple almost since the moment that her marriage to Marc Anthony collapsed, in spite of her friends and family not exactly approving. Casper is nearly 20 years younger than Jen and had little success as a back-up dancer until she took him under her wing. He has seen a bit of success with her help and those closest to Jen have warned her about his gold digging but to this point Jen has refused to listen.

Casper’s no fool and obviously if they had a baby then he would be entangled in her life for 18 years which could easily set him up for a wind fall of sorts. Would Jen want to have Casper’s kid? Is it a step that she would take at this point in her life? She loves her kids but would Jen really want to start over with a new baby at 44, when her life and career appear to be really on track?

Does Jen look pregnant to you? Is Jennifer the next Halle Berry? Is it a baby bump or just a bloated day? Tell us your thoughts in the comments below.